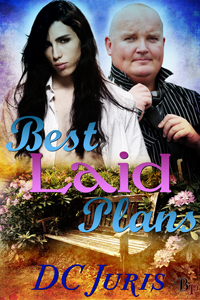 Disowned by his family for being transgender, Kale drained his bank account and set out to go as far as the money would take him. He planned to make a new life for himself. But when the money stopped, he found himself homeless, his plans pretty much screwed. Perry set out to find a male hooker to slake his lust. Instead he found a handsome young man who insisted he wasn't a prostitute.  Can they work past their differences and see what's in front of them, or will the best laid plans stay astray?

Kale shuffled along the sidewalk, kicking errant leaves as he went. He snuggled his coat around him against the chill of September's early autumn winds as he pondered just where he was going to spend the night tonight. He'd finally run out of money. And luck, it would seem. He shivered and looked away as he passed a scruffy homeless man on a bench. Would that be him before long?
He skirted past several scantily clad women who offered him their services, waving them off with a murmured, "Sorry ladies, I'm gay."
A black sedan pulled up to the curb, and the window slid down. "Hey!" the driver called out.
Kale looked around, finding no one else who the man could've been yelling for. He pointed to himself. "Me?"
"Yeah, you. C'mere."
Kale peered into the car without getting any closer. He didn't recognize the older man behind the steering wheel, didn't really know anyone in this town yet. "Can I help you with something?"
"Probably." The guy grinned. "How much for a blowjob?"
A fiery blush steamed up Kale's neck. "Oh. I'm not um..." He glanced down at his clothing—red button-up shirt, jeans, boots. He wasn't dressed like a hooker, was he? Then again, what did male hookers dress like?
"Fifty bucks?" the guy asked.
"No, you don't understand." Kale shook his head. "I'm not um...working. I'm just..." Just what? Just a runaway disappointment.
"Fine. Make it a hundred. C'mon. Get in."
His eyes went wide. A hundred dollars? For a blowjob? A hundred dollars would get him a room at a motel and a meal for the night. And a blowjob wouldn't take all that long. But he'd never done anything like that before with a stranger. The guy looked pretty clean. How bad could it be? Just a few minutes' work, turn his head, spit, and take the money. "I don't swallow," he blurted.
The guy shrugged. "I don't care."
The words hit Kale with full force. The guy didn't care. Not about him, his story, why he was out here on the streets in the first place. Not about his past, present, or future. Not about anything beyond his mouth. Kale frowned.
"You coming or not?" the guy prompted.
"Show me the money."
He held up a hundred dollar bill.
If the guy would pay a hundred dollars for a blowjob, how much would he pay for something else? But Kale had seen way too many Lifetime movies about runaways turned prostitutes who got into cars and were never seen again. He puffed out his chest and straightened his shoulders, tried to look like he had some kind of guts. "Okay, but we're not going to a skeevy hotel or your house or anything. Got it?"
The guy shrugged. "Whatever."
Kale looked up and down the street and reached for the door handle. The car, like the guy, looked clean and tidy, smelled nice. He smiled at the green, tree-shaped air freshener hanging from the rearview mirror, and tried not to think of that scene in the movie Seven where the cops found hundreds of the things hanging in the sloth victim's apartment.
"So." The guy glanced over at him. "Almond Park okay?"
Not too far away, and he'd been there before. Definitely not too private. Kale nodded. "Yeah. Yeah, sure."
"There's a spot behind some trees. It's hidden and quiet," the guy explained.
Kale nodded again. Hidden and quiet. Just like him. He looked out the window as the scenery passed. What was he supposed to do here? Make small talk? Keep his mouth shut? Presently, the guy made the decision for him.
"You from around here? I haven't seen you before." He coughed and cleared his throat as he pulled into the park entrance.
"I'm from Boston," Kale told him. "Moved here a little while ago."
"Boston?" The guy swerved to avoid a hole and turned the car down a grassy path. He brought them to a stop and gestured out the windshield. "The spot's a few feet in there, but we have to go on foot."
Kale opened his door and got out. He took a deep breath. Even though he knew he wasn't technically in the woods, the air did smell different—crisper, cleaner, like water and trees and fire all rolled into one. Made him homesick for backyard campouts with his brother.
"You change your mind?"
He turned to see the guy had started up the path and was waiting for him. Kale bit his bottom lip. Tall, broad, and beefy, with a day's worth of beard hinting at a scruffy side and bald, the guy was definitely his type. Flipped his switches in all the right ways. He'd never considered himself a cub, but for a bear like that?
"Hello?"
"Coming." He followed behind the guy to the spot. Definitely hidden and quiet—they had to fight their way through some overgrown bushes just to get there.
Posted by Marci Nichelle Jansen at 12:00 AM