This is Betty Bird. 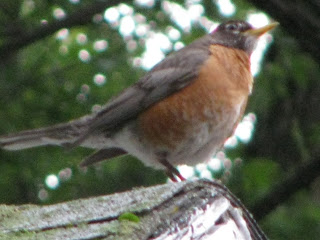 Shortly after Hubby and I started to move in, Betty Bird decided she'd move in as well. She built this nest... 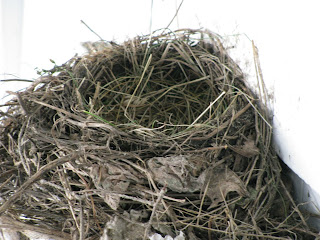 and then a few days later, laid these two eggs. 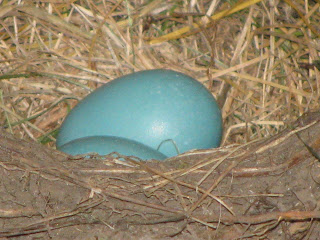 Betty Bird is rather shy when she's on the nest, so for a while, all I was able to do was photograph her from inside the house. They're a little dark, but here is Betty Bird sitting on her nest. 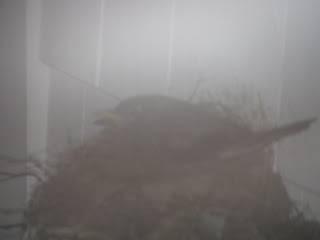 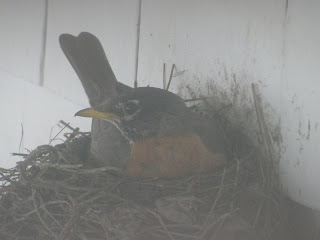 Then, this morning, we woke up to this little fella. 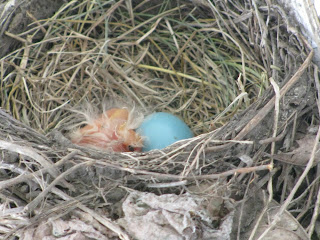 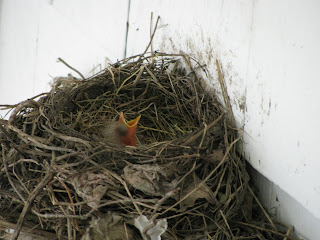 And here is proud mama Betty Bird with her little Tweet. I waited 20 minutes for this shot, standing on the top rung of a ladder, peering down at them from the top of the inside door, one hand holding two slats of my mini blinds open, the other hand trying desperately to keep the camera still! 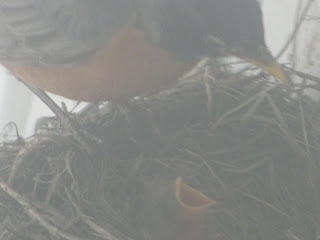 Posted by Marci Nichelle Jansen at 3:22 PM No comments:

Guest Blogging over at Top2Bottom Reviews

http://top2bottomreviews.wordpress.com/2011/06/26/who-better-than-canyon-by-dc-juris-a-project-with-a-purpose/
Posted by Marci Nichelle Jansen at 12:23 PM No comments:

http://top2bottomreviews.wordpress.com/2011/06/19/a-fathers-day-contest-from-kayla-jameth-berengaria-brown-dc-juris-rebecca-leigh/
Posted by Marci Nichelle Jansen at 12:41 PM No comments:

My newest release, "Who Better Than Canyon," is out from Breathless Press. This story is pretty special to me.It's not like the others I've written.

For a couple reasons. On the one hand, Canyon, one of our main characters, resisted me every time I wanted to write the sex scene. He's one of these guys who needs to be sure before he sleeps with another man, and he had a lot of doubts about Simon.

On the other hand, I saw a comment from another author way back when, that said romances couldn't be written without sex, because readers wouldn't read them. It's always been in the back of my mind to prove this person wrong. Maybe I have. Maybe I haven't. I won't know until I get the first royalty statement.

This story is special to me, though, for a larger reason, and it didn't come to me until I was nearly done writing it. Canyon's name had been picked out long before the story even had any back bone. It started with a guy named Canyon being refused entrance to his lover's funeral. At first, I balked at the name Canyon. I mean, really? Who names their kid Canyon? And didn't that sound just a little like a trite, over-used romance novel name? Canyon just cocked an eyebrow at me and said, "that's my name."

Once I got over the name thing, the story flowed nicely. It wasn't until I typed this sentence: Donald stopped and faced him. “Like the wrestler? Who betta than Kanyon?” he mimicked. “Rest his soul, of course.” Looking skyward,he crossed himself quickly., that I realized the story had a bigger meaning than just two guys meeting and falling in love. Maybe this story could stand for something, but without being one of those mushy, overly preachy Stories That Stand For Something. So I've dedicated the story to Christopher Klucsarits, a professional wrestler who "played" Kanyon in several wrestling circuits, and one of my favorites to watch.

Christopher's career was shadowed with controversy over his sexual orientation. Was he gay? Some, including him, said yes. Some, including him, said no. Who knows? Unfortunately the answer passed away with him, when he took his own life on April 2nd, 2010. Whether or not he was gay no longer matters (and shouldn't have mattered ever). What matters now is breaking the cycle of hopelessness and despair, breaking the cycle of people feeling like there's no other option than suicide.


The cycle of pain has to end, and for that to happen, we all must do something. Make a monetary donation to organizations like The Trevor Project when you can, and when you can't, make a human donation to everyone else. Smile at people. Don't judge or mock. Be patient and kind - you have no idea what the life of the cashier scanning your groceries is like. Maybe she scans slow because she was in a car accident and has brain damage. Or maybe she's just a lazy bitch. The point is - you don't know. And you really, really don't know what the impact of your actions and words will be. Growing up, all I needed was one person to treat me like I mattered. Just one. Most people get whole families - I just wanted one.


"Who Better Than Canyon" Blurb:
When Canyon's ex-lover, Robert, dies, he leaves behind a last request that Canyon take word of his passing to Simon, an old friend on the east coast. Canyon reluctantly agrees, and soon finds himself falling for Simon, despite the nagging belief he shouldn't. Canyon is plagued by guilt over his part in the accident that claimed Robert's life. But Simon knows something Canyon doesn't: Robert's death wasn't an accident, but a suicide, and Robert's intent was for the two men he left behind to come together. But Robert's plan didn't account for two things: Simon's disbelief that anyone can truly love a soon-to-be-cripple, and Canyon's staunch decision that the next man he gives himself to will give him a wedding ring first. Can Canyon and Simon set aside their own issues long enough to see what lies between them, or will they both miss out on their happily ever after?

Excerpt:
Dunwood Funeral home loomed up out of the surrounding trees like some sort of ominous monolith. With its gables and spires, weathered brick facade, bright blue awnings over every window—complete with fancy scrawled monogrammed Ds—and fake green grass carpeting covering the wide entry stairs, it was completely out of place in the miles of desert.

Canyon parked his truck and stared at the building for several long minutes before he finally shut off the engine. He'd been only seven the last time he'd attended a funeral, but his memories were still vivid. Dozens of people seated on rickety, squeaky wooden folding chairs and crammed into a tiny parlor with a broken air conditioner. And then there was the body—painted up and put on display like a bad art exhibit.

He'd sworn then—even at that tender age—that he'd never, ever subject himself to such emotional torture again. Of course, that had been twenty years ago. Before Robert. Being here now was the least he could do after causing the accident that had taken Robert's life. No, not causing, he admonished himself. It had been Robert's choice to drive away angry after their fight. He'd offered to let Robert to stay, but his pig-headed nature had taken over, and Robert had sped off in a cloudy haze of dirt and flying pebbles. No one could've talked sense into Robert that night, not Canyon, not anyone. But that didn't make Canyon feel any less guilty.

He adjusted his tie, another thing he'd sworn off, and opened the door. He stepped down onto the pavement and slammed the door shut wincing at the inappropriate crack. He headed up the walkway and waited at the end of a long, serpentine line of people moving at a snail's pace toward the entry. Ten minutes crept by before he climbed the stairs and spotted the reason for the lag.

A pert nosed, fresh-faced young blonde woman stood at the door, holding a pen and a clipboard. "May I have your name, sir?"

This stunk of Natalie's doing. Heartless bitch. His name wouldn't be on that list, and he knew it. "Canyon Roth."

She scanned the list, looked back up at him with sympathetic round eyes. "I'm sorry but your—"

"Name's not on the list. Yeah, I know." Canyon looked past her into the solemn entryway of the funeral home. Goddamn Natalie. Maybe he could make the internment, if nothing else. "Can I ask where he's being buried?"

The woman bit her lower lip and shook her head. "I'm sorry, but I can't give out that information to..."


Posted by Marci Nichelle Jansen at 1:58 PM No comments:

Email ThisBlogThis!Share to TwitterShare to FacebookShare to Pinterest
Labels: Canyon, no sex, Simon, The Trevor Project, Who Better Than Canyon

4.5 Diamonds for "The Door Under the Bridge"

The cover for "Finding Sanctuary" is up for an award!  Go vote!!!

http://elisa-rolle.livejournal.com/1298836.html
Posted by Marci Nichelle Jansen at 12:16 PM No comments: