Long before I penned my m/m/m zombie apocalypse tale, "Bad Moon Rising," I was a zombie fan.

Why? What's the draw?

For me, it's two fold. One on hand, I love the gore. Growing up, when all the other kids were hiding behind their parents' shoulders during horror films, I was intently staring at the screen, trying to figure out how it had all been done. The art behind the effects fascinates me.

On the other hand, I'm drawn to the dogma. The idea of our high and mighty society being brought to its knees with one fail swoop - that's mind-numbingly large. It's interesting to see the different takes on the "zombie apocalypse" out there in entertainment.

For instance, in the "28 Days" films, the zombies are the result of the "rage virus." It's a commentary on our society - that if we continue to be angry people, that anger will eventually turn on us. It's also this franchise that gives us a non-bite infection - in the first movie, one of the characters is infected when a drop of "rage virus" tainted blood falls into his eye.

Then there's "The Boneyard," which gives us flesh eating monsters who are the result of an age-old curse.

In some movies, zombies are only interested in human flesh. However in Romero's "Survival of the Dead," the zombies are taught to eat horse meat.

Another interesting spin is the movie "I am Legend" (which yes, I know these are technically more like vampires, but hear me out...) we're shown thinking monsters. These monsters use tools. They create traps. They have a leader. At one point in the movie, Will Smith's character remarks that they've lost all their humanity, but I think it's the other way round. I think, as they are, they're more human than not. Humanity at its basest is still human.

In any event, I'm giving away a prize today to one lucky, random winner. I'm offering up a free pdf copy of "Bad Moon Rising." 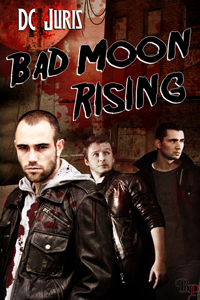 Bryce never expected to find himself smack in the middle of a zombie apocalypse, and he certainly never expected to meet the man of his dreams along the way. But there's more than zombies in the way of his happily ever after. Richard comes with baggage, in the form of his on again, off again bipolar lover Cole, who is off his meds and descending into his own mental hell at an alarming rate. Will the three men be able to work out their romantic feelings? Oh yeah...and then there's that little issue of the zombies...

To be entered to win, all you have to do is leave a comment below, including your e-mail.