NEW RELEASE - "Nothing to Forgive" 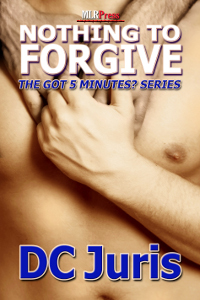 Finally done with war and fighting, Hadryk, a military officer, has agreed to be a pup host - to be impregnated - in order to protect his lover, Vodwynn, and he can't hide the proof much longer. Embarrassed and worried, he considers staying with his brother instead of going home, but, drawn by his love, he goes home to Planet Torbid and Vodwynn. Vodwynn reacts as anyone would. But when he realizes the sacrifice Hadryk has made, can he change his mind? Can he open his heart to discover the new wonders of Hadryk's body, and how strong their love truly is?

The stars whizzed by in mesmerizing streaks of white, giving way to wispy nothing violet clouds as they entered the atmosphere. Hadryk stared out the window at the approaching ground of Planet Torbid. He should be happy to see his home. Instead, his guts twisted and he broke out in a cold sweat. How would he explain things to his lover? How would he make Vodwynn see he’d had no choice in the situation?

The shuttle descended sharply, and one of the guards got to his feet, tight gorton hide armor creaking softly with his movements. “General.”

Hadryk nodded to the guard and stood and his heart sank into his boots.

The guard snapped to attention and raised a hand in salute, thumb against his temple, fingers splayed wide. “On behalf of the Predeck and a grateful Legion, I thank you for your service.”

Hadryk grunted and returned the salute. He stepped off the shuttle, out of the confines of that quiet little dark cocoon, and into the bright, bustling day of his homeland. Chill winds met him, and he was thankful for the extra layers he wore, even if they hadn’t been intended to stave off the cold. Portak and Borta, the twin moons, could just be seen to the far east, harbingers of not far off dusk. He shouldered his pack and started off down the street.

Strangers rushed up to him, some giving mock salutes, others patting him on the back and wishing him well. If any of them had actually known him, they might have noticed that he looked a little different. A little bigger. A little fatter. But no one seemed the wiser. Perhaps he could keep it that way—at least for a while.

He arrived at his home and stood there on the wide bottom step, staring stupidly at the door, his gaze tracing the intricate scrollwork of his family crest. Vodwynn wasn’t expecting him for another cycle or two. He shuffled his feet and glanced up and down the street. Perhaps it would be better to stay somewhere else for the time being. He could hop another shuttle—take one to Darmuth and stay with his brother, Tamar. That might be the best thing to do, considering. He ran a hand down over his belly absently. He could send Vodwynn a message; say he would be back in six cycles—that would be enough time.

Hadryk cursed silently and looked up to see his lover standing in the doorway. Warm light from within shone like a beacon. He hadn’t heard the door open.

“By the twin moons!” Vodwynn threw his arms around Hadryk’s neck, sobbing happily. He pulled back and stood close, hands holding Hadryk’s cheeks. His gaze strayed to Hadryk’s hair. Or lack thereof. “Your hair...” He stroked Hadryk’s once long locks.

Hadryk had all but forgotten about the hair until today. Visions of desolate sands flowing into sweltering swamplands clouded his mind. He shook them off with a shrug. “Durcat gets hot during the summer. We all cut our hair.”

Was he? Hadryk hadn’t noticed. He reached out and touched Vodwynn’s cheek, trailed his fingers down the side of Vodwynn’s face. “The day is cold. Nothing more.”

“Come, I’ll start a shower to warm you.”

Not the homecoming he had wanted, but neither was the homecoming he wanted the one he could have. Not anymore. Not like this. He followed Vodwynn into their home—everything looked so familiar and comfortable, from the overstuffed couch to the blanket with abandoned book atop piled haphazardly in Vodwynn’s favorite chair—and down the hall to the small washroom. He stood to the side as Vodwynn prepared the water, humming softly and looking over at him every now and then with a sweet smile that broke his heart. The banging and groaning of the metal pipes made him flinch.

Vodwynn straightened and gestured to the shower stall. “I can stay. Help you...” That sweet smile turned to a seductive one, and Hadryk swallowed down bile.
Posted by Marci Nichelle Jansen at 12:00 AM