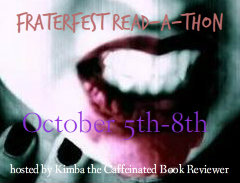 Okay. So the idea behind this is: "You can read whatever you want as long as one book is either a Rhiannon Frater novel or a bump in the night book (vampire, zombie, shapeshifter, ghost etc)."

Since it doesn't appear that Frater writes m/m, which is what I like to read I chose to read a "bump in the night" book. I picked:

"Dreaming in Color" By Cameron Dane.

The sight of the red door saves Colin Baxter in his dream, but very quickly a man appears and the dream becomes a thing of raw sexual need with a person Colin can’t identify. He just knows the man needs him, and Colin aches to find and heal his lover…even if the man doesn’t really exist.

Marek Donovan just wants to be left alone to lick his wounds and recover from a terrible loss. The rundown house in Fiji suits his minimal needs just fine. He doesn’t want to face the world again, and on a small, secluded island figures he’s safe from everyone and everything. Particularly guilt from his past.

Dreams of this nameless man and his house plague Colin for two years, but he’s come to care about his phantom lover so deeply he doesn’t want them to end. Then Colin visits Fiji and comes face-to-face with the house from his visions, prompting him to believe these dreams just might be his destiny.

Colin knocks on the door, determined to find answers. What he finds is a man he already knows.

Now, most of you know I purposely don't read m/m romance, and I don't have much time for reading in general. Still, I thought I'd give this a go. I've never read anything of Dane's, so we'll see.

I'm not sure what sort of paranormal it is... the blurb leads me to think ghosts? But I'll let you know what I think as I go, right in this very post.


Okay. So I'm a little late at posting this, but things have been up and down, and I've finally got a second to sit down.

I have to say, I really enjoyed this book. I loved, loved, *loved* (did I mention loved?) the premise, and here's why:

1. I have always wanted  a red door on my house. Red is cheery and warm, but also spicy and strong. Also, my mother always said only whores wore red. Consequently, I didn't wear much red. I think maybe, too, it has to do with going home to that black and brown door - knowing what kind of hell was behind it for me.  A red door was the farthest thing from that I could imagine. I love that Marek, even at a young age, wants a red door.

2. I have never felt particularly at home anywhere. The house I grew up in held nothing but pain for me. The first apartment I moved into was equally tainted, but for different reasons. The first home I shared with my husband existed under a pall of several family issues. Last year, though, we went to look at a  house on a whim. My husband still can't say what caused him to look up houses. We'd toyed with the idea of buying a house, and knew we would probably end up having to (long story) but neither of us were ready. But he found this lovely little hundred year old house, a fixer upper, and we went to look at it for shits and giggles.

The moment I walked in, I felt at home. It was as if the house had been waiting for us. I didn't need to look around - I knew I wanted it. We bought it and moved in. One of the first things I did was rip up the carpet to reveal this beautiful old hard wood floor - lovely dark color with these wide planks. I felt the house sigh, as if shaking off years of dirt and dust. The next thing I did was fix the plaster on the walls. We didn't want to rip it completely off, because we liked the way it looked, and it was original to the house, but parts of it were cracked. So I got a big bucket of spackle and, using only my fingertips, I repaired every bit of busted plaster. This time, I felt the house heave a sigh that seemed born of pain. Like I had put salve on a burn.

And I know what you're thinking - I'm a looney. And you're right, but not for these reasons. Lots of people who walk into my house say the vibe is very happy. Our neighbor, who grew up across the street and knew the family before us (we are only the second owners), says he has never seen the house so happy.

Anyhow, getting back to the book - I liked how the author maintained that Marek couldn't feel the house. It would've been very easy to have this ending where he's all "I feel it now!" but it wouldn't have made sense, and it wouldn't have rung true. I also liked how one of the supporting characters brought a bit of logic to a very emotional situation, because frankly I agreed with him. Marek learns a very hard lesson just before moving to Fiji, and it's one that many of us struggle with - the lesson that the people we treasure are more important than anyone's opinion of you, and that no one should feel forced to hide who they are for the comfort of others.

Over all, I'm glad I picked up this book, and I'd probably re-read it one day.