NEW RELEASE: Get Him to the Geek 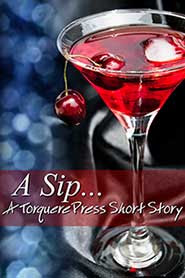 Two years is a long time to swear off love, but John Daily is doing just fine. Sure, he's lonely, but he's not risking his heart again. His best friend, Sylvia, has other plans. She's set him up with someone who will be perfect for him. Now, if she can just get him to the geek...

He pulled up to the curb and got out to follow Bernie to the door. Bernie sauntered up the path, those hips of his swaying back and forth. John's gaze fell to Bernie's tighter than should be legal ass and his cock swelled, straining against his jeans. He summoned the willpower not to rub his hands together and let out a whoop of anticipation.

Bernie reached for the door... and spun around to face John, eyes wide. "You can't come in."

John blinked several times and shook his head, trying to digest the words. "Um... What?"

"I'm sorry." Bernie blushed and bit his bottom lip. "But you just can't."

"I... can't?" What the hell? Had he somehow read the signs wrong? Bernie had been receptive to the idea of dessert and flirtatious on the ride here. He'd offered his house, for crying out loud! "Can I ask why?"

Bernie shifted back and forth on his feet and sighed. "You're not really my type."

Not his type? Now that had to be complete bullshit, unless they'd stepped into a time warp of some kind. Sylvia had assured John they'd get along. Of course, she'd also told him Bernie was a nerd to the nth degree, which Bernie had been trying to refute all night. Whatever the reason, it pissed John off. Sylvia had been right when she'd said he'd find Bernie attractive, but there was more to it than that. Even through Bernie's apparent deception during dinner, John had sensed something in him; had thought they might be able to have something together. Well, he wasn't about to beg, and he wasn't about to run away with his tail between his legs like a scalded dog either. He had more pride than that. John shrugged. "Okay."

"What do you want me to say?" He shook his head and ran a hand through his hair. "Listen, I don't know what your deal is. Sylvia led me to believe we'd get along, and I thought we were. I'm not saying we have to fuck on the first date. But you seemed receptive in the car. Although I guess I shouldn't be surprised."

"Why not?" Bernie whispered the question, eyes wide.

"Because you've been lying to me all night. Or hiding something. Either way, I guess you're not the man I hoped you were. So, it's probably for the best." John turned and trudged down the walk toward his car.

John turned slowly to face him and paced halfway up the walk. "Come again?"

Email ThisBlogThis!Share to TwitterShare to FacebookShare to Pinterest
Labels: Get Him to the Geek, New Release, Torquere Press