Back to School Blog Hop

So, I don't have any stories that actually feature school as a theme - no teachers in any of mine, no college kids, nothing like that.

My prize for the hop is, of course, a free pdf copy of "Relearning the Ropes." To enter to win a copy, just leave a comment below with your e-mail address. Simple! 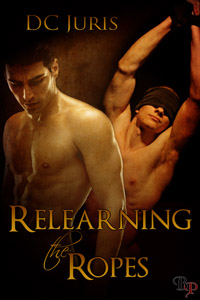 Excerpt:
Marcus rolled over to stare at the clock. 3:25 AM. A month ago, at precisely that moment, his phone had rung. He’d answered it, expecting it to be the only person who ever called him that late, his friend Ju- lius, but instead it was Julius’s lawyer. The man apologized for waking Marcus, but Julius was dead—condolences, of course—and Julius left the care of his sub, Charlie, to Marcus, and could Marcus please go over to Julius’s house and fetch Charlie?

At 3:45 that morning Marcus went and picked Charlie up, and, for the past month, Charlie slept in the spare bedroom across the hall. Marcus hadn’t slept since. Not that he didn’t like or want Charlie. He did, on both counts. Loved Charlie, was quite in love with Charlie. But if Marcus had wanted a live-in sub—which he hadn’t; his life was far too busy and complicated, and he was entirely too set in his ways—he wouldn’t have chosen one like Charlie. Charlie was a complex little creature: delicate and high-maintenance. He took everything Marcus knew about how to treat a sub and turned it upside down.

Marcus groaned and flipped over onto his other side, putting the mocking glare of the clock’s bright red numbers behind him. Aside from Charlie, Marcus had never dominated a man he’d loved. He had no clue how to reconcile the two. Charlie needed clear boundaries, a clear definition of their relationship, but how was he supposed to define their relationship to Charlie if he couldn’t define it to himself? He tried to treat Charlie like any other sub, but the fact of the matter was Charlie wasn’t just any other sub. Sold into sexual slavery at fifteen, Charlie had been dragged all across the country before he’d landed in Julius’s hands.