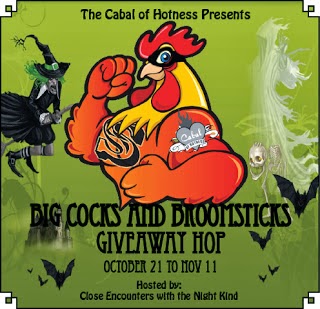 That's also my prize today - one lucky winner will get a free pdf copy of "Orion's Way." To enter to win, just leave a comment below, including your e-mail, and tell me what your favorite thing about Halloween is or was as a kid.

Me? I wasn't allowed to celebrate Halloween as a kid. My parents thought it was "the devil's holiday" and was Satanic. (Certainly not surprising if you know me and have heard about my parents.) So now I go all out to decorate and celebrate. I was even married on Halloween in a local haunted house.

Anyhow, onto the snippet! 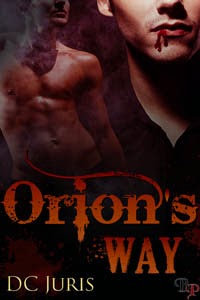 Orion is a vampire with a tragic past. After running away from abusive parents at the tender age of sixteen, he was turned by a ruthless elder vampire and forced to torture and sexually abuse human feeders and submissive vampires. Though that's all behind him now, he still lives in the shadow of what he was, and it has cost him the loyalty of Xavier, the human feeder he loves. Malagan is Orion's closest friend--the vampire who saved him from brutality all those years ago. Malagan knows the Dominant side of Orion--the side Xavier needs--is still there, lurking below the surface. But if Orion's going to find his way back to who he ought to be, he'll need help. And Malagan is just the man for the job.

Malagan nodded and unfastened his pants. He pushed them down over his hips, hooked his thumbs in his underwear, and pulled them off as well, gaze locked on Orion. Orion swallowed hard as he tore his eyes from Malagan’s and looked down at Malagan’s already hard cock. He’d never seen Malagan naked, and he couldn’t suppress a groan of appreciation as Malagan’s shirt came off to reveal a chiseled, tanned chest, covered with a sparse mat of hair and a tattoo of a bleeding sword clutched in a clawed hand, marking him a member of the Lyshun Clan—the oldest of the vampire clans.

Malagan strolled by a cage, smiling as he ran his fingers along the bars, by the free-standing sling—again, he touched the metal with a smile—and past the large, four-poster bed with its shining chains that hung from each corner. He smirked at the Saint Andrew’s Cross on the far wall, but didn’t pause there either, nor at the whipping post, though Orion would’ve happily accepted that choice. Malagan stopped at the rear of the room, stood in the middle of a simple padded square, and put his hands behind him, standing like a soldier at parade rest.

Orion paced back over to the table along the wall, picking up things and putting them back down. “What would you like me to use?” he asked.

Malagan smiled and inclined his head. “Whatever would please you, Master. Your joy is mine.”

Though his words were submissive, his stance wasn’t. Malagan kept his shoulders back and his head up, watching Orion’s every move until Orion felt as though he were the one on display. Orion squared his shoulders and took a deep breath. He picked up a shiny black riding crop and turned to face Malagan. “What is your safe word?”

Malagan shook his head. “It should be tell me your safe word. It’s a command, not a question. You’re the Dom, and I’m your sub. I should feel compelled to answer you. Stop flipping the crop around. It makes you appear not to want to touch it.”

Orion glanced down and frowned at the unconscious movements of his hands, tossing the crop back and forth between them. He wrinkled his brow, and let out a sigh, understanding what a few of his fellows had meant when they’d talked about pushy bottoms. Though he knew Malagan’s guidance and advice were for his own good— knew he very much needed them—they still grated on his nerves. He clenched his right fist tightly around the handle of the crop and gave Malagan a lopsided grin. “I’m rusty at this.”

“It’s all right.” Malagan shifted his weight and nodded. “Just try it again.”

Orion walked forward, touched the tip of the crop to Malagan’s chin, and raised Malagan’s head with it. “Tell me your safe word.”

Malagan grinned. “Much better. My safe word is ‘potato’, Master.”

“Potato.” Orion nodded. “I suggest you keep it close to your tongue. You may well want to use it.”

A flash of defiance glimmered in Malagan’s eyes but he said nothing, simply bowed his head. The gesture filled Orion with a giddy sense of power, made his head swim, and made him want test Malagan. Push Malagan’s limits and see just how far he could make Malagan go. Wipe that smug sense of superiority right out of Malagan’s mind.

Orion trailed the crop down Malagan’s chest, tapping each nipple, then dipped it down to stroke Malagan’s cock. He stepped around, dragging the crop across Malagan’s body, and delivered one hard, loud smack to Malagan’s ass.

Bolstered by the reaction, Orion administered the crop four more times—two hits to each cheek. He rubbed his hand over Malagan’s bright red flesh, luxuriating in the radiating heat, and the way Malagan pressed back against the touch. But it wasn’t enough. His desire to bring Malagan to his knees still burned. His gaze went again to the table; he wanted desperately to see Malagan trussed up on it, but Malagan had already put a nix on that idea. He could still dominate without the binding, though.

Orion lifted the crop and smacked Malagan’s shoulders lightly with it, then up and down Malagan’s upper arm as he walked back around to face Malagan. He reached down and gripped Malagan’s cock as he rained gentle taps of the crop down on Malagan’s chest and nipples. “Do you enjoy my attentions?” he asked.

Malagan raised his head and met Orion’s gaze. “Yes, Master. Very much.” He pulled his hands around in front of him and held them out to Orion. “Would you tie my wrists please, Master?”

Orion raised an eyebrow, looked down to Malagan’s hands and back up to his face. A test, of course. They had already set ground rules, and no Dom worth anything would go back on his word in the heat of the moment. Orion shook his head. “No.”

Malagan nodded and smiled. “Dom to Dom, you may bind me, if you wish.”

Malagan really did trust him. Hearing Malagan profess his trust was all well and good, but having Malagan make such a gesture, having Malagan place his safety in Orion’s hands, was something else entirely. A spike of adrenaline made Orion’s heart race and his blood pound in his ears. He turned immediately and went to the table, grabbed up a pair of leather cuffs and hurried back to Malagan, nearly tripping over his own feet.

“Easy,” Malagan murmured. “A little less eager, there, if you don’t mind.”

Orion took a deep breath and nodded. Hands shaking, he reached out with the cuffs.

“Steady yourself,” Malagan told him. “Your nerves are understandable, but your sub will feed off them. You know that. Think for a moment, before you act.”

Orion shuddered and turned away, barely suppressing the sob that suddenly rose in his throat. He couldn’t do this. Who was he kidding? He was broken, worthless. For God’s sake, he couldn’t even dominate another Dom without being coached. He sucked in a breath as Malagan’s arms slid around him and pulled him close. Malagan took the cuffs from him and turned him around.

Malagan went down on his knees and gazed up at Orion, holding out the cuffs. “Please, Master.”