To Sex or Not to Sex

This is a no comment post. What does that mean? Well, it means it originally appeared as a guest post on a website but it didn't get any comments. I'm sharing it as a recycled post because I think it still has merit, and well, frankly I wrote the darn thing, so somebody should read it! LOL

This one originally appeared HERE 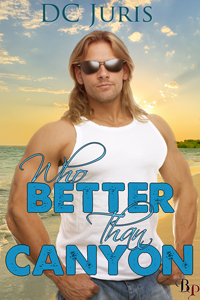 Typically, my stories are full of hot, steamy sex. Some of them, I've been told, are "more sex than story." While a lot of authors would take that as an insult, I'm fine with it. You see, I like sex. I like to read it and I like to write it.

So why, you ask, did I write "Who Better Than Canyon?" without any sex?


The answer is because that's how the characters dictated it would go. I've been frequently told that a romance without sex wouldn’t sell. Based on that notion, I'd always had it in the back of my mind to do one - but not this one. I was thinking in a couple years. But as I kept writing, I realized these guys just weren't getting in bed with each other - at least not in the carnal sense. Because there wasn't any sex involved, I made sure to have the cover artist do a rather "tame" cover - no half naked men, nothing sexual or erotic. And I'm really glad I did.

I've gotten a lot of good feedback. Reviewers have said things like "unexpected" and "refreshing" and "nice change of pace." That's all well and good, but what's really important to me is the reader response - which has been wonderful as well. I've been inundated with e-mails thanking me for writing something without "all the embarrassing extra stuff." One woman appreciated the lack of sex because she felt she could share the book with her teenage son, who is gay. She said she knew "he is eventually going to have sex" but she'd "rather not think about it…not because he's gay but because he's my baby. At least he can read this story, see a positive gay relationship, and realize he's worth more than his penis."

It never occurred to me that someone might share one of my stories with their kids. Let's face it, as an erotic romance writer, I don't have that opportunity. They can't even visit my website, since it contains graphic content and is strictly age eighteen and over. It was nice to think that maybe my work might reach the next generation. Not that I think they can learn from it or anything like that. I'm a firm believer that if you want sex advice or instruction, you don't pick up a romance novel, whether you're male or female. I can remember reading bodice ripper type stories when I was a teenager, and the only information I walked away with was that a woman wasn't anything without a man, sex was always either excruciatingly painful or amazingly wonderful with no middle ground, and that every man came complete with hands calloused in "all the right places" and a huge, throbbing rod. Definitely nothing they covered in Sex-Ed.

No, the reason I'm touched about her son being able to read my work is that he had characters to identify with. Growing up, none of the romances contained any characters I understood. I had a female body, but I didn't feel like a female. I didn't swoon, I didn't need to be rescued. I wasn't hard headed to a fault, or ditzy and stupid. I felt like a man - but not the men in those books. I wasn't overbearing and powerful, or rude and aloof. I longed for pages that contained people I could relate to. Why were there no gay characters? Where were the characters who questioned their gender - surely I couldn't be the only person in the world doing that? And surely, I wasn't the only person like me who read stories?

I'm thrilled to have found a genre where I can write about characters I like - characters like me. Flawed and real, with "alternative" views and lifestyles (at least "alternative" according to society.) If they're having raging hot sex (therein lies the fantasy LOL) then that's even better.

But I'm glad that young man got a glimpse of romance outside the cookie cutter norm. I'm glad he got to have his happily ever after fantasy in the pages of my work. After all, that's all any young person wants - the illusion of the happily ever after.
Posted by Marci Nichelle Jansen at 12:00 AM