Backlist Feature: Two of a Kind 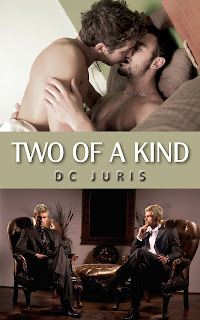 Vincent and his childhood friend Eric became a couple after Eric initiated him into the pleasures of the Playhouse, a refuge for men to act out their submission/Domination fantasies. Their relationship is warm and loving, but not exclusive. Eric is a “switch,” and since Vincent is a submissive, Eric sometimes looks to his own Dom, Anton, for satisfaction—causing Vincent to feel jealous and insecure.

Then Anton’s uncle dies and Dimitri—Anton’s twin and a troubled, surly, irresistibly sexy version of his brother—comes for a visit. When Dimitri sets his sights on Vincent, ridiculing his supposed sexual passivity, Vincent begins to wonder: is he really a sub, or a switch, like Eric? In the first blush of their relationship, Vincent and Eric reveled in their connection, calling themselves “two of a kind.” Perhaps they are also alike in ways that challenge their current power dynamic.

Two of a Kind continues the story of Vincent and Eric, which DC Juris began in his novel, Finding Sanctuary.

Vincent stood at the rear of the room, in the corner by the last row of chairs. He had never understood the custom of viewings, of people who knew the deceased to varying degrees—or not at all—standing around ogling the body. He kept to himself mostly; Eric was busy with Anton and mutual friends. Though they’d grown up together, Eric had branched off into the BDSM lifestyle at a young age, unbeknownst to Vincent; most of the people here seemed to know both Eric and Anton from that avenue of their lives. He recognized a few of those present from the Playhouse, or from barbecues and get-togethers Anton had hosted, but he didn’t know any of them well enough to feel comfortable chatting. Couple that with the fact that he’d never even met Anton’s uncle Frederick, and Vincent wondered why he was here at all. His Dom certainly didn’t seem to need him.

Eric would glance back at him every now and then, nod, and smile. Vincent tried to muster what he hoped was a warm return smile. Once in a while, Petyr would turn around from his spot at Anton’s side and send a shy smile Vincent’s way. Vincent felt for the other man. He couldn’t imagine being in the same situation—watching his own Master grieve. Bad enough watching Anton going through it.

Anton maintained a stoic facade, though. He smiled politely and shook hands, accepted condolences and well wishes with grace and ease. But Vincent knew the evening was taking its toll. The longer things drew out, the more Anton sought Eric. Brief touches between them, the rub of Eric’s hand up and down Anton’s spine, the squeeze of hands, the way they stood close enough to bump into each other constantly .... Eric would belong to Anton next weekend.

And what of Petyr? Didn’t he tire of the relationship between the two Doms? Or did he see it as a reprieve? A night off? Not that Anton was an unfair Dom. Petyr wanted for nothing and certainly seemed more comfortable in his role than Vincent. Maybe Eric had been right when they’d first discussed the lifestyle two years ago—maybe Vincent wasn’t a sub after all, but a switch.

“Daddy let you off your leash?” Dimitri sidled up to him.

Vincent ignored his words, but not for any other reason than the scent of Dimitri’s cologne intoxicated him—made him want to turn and bury his nose in Dimitri’s shoulder, drink in that fresh scent.

Dimitri had changed from his casual clothes into something a bit fancier—slacks and a black shirt, which he wore with a long-sleeved T-shirt underneath. Vincent suddenly felt underdressed in his jeans. Summers in Upstate New York weren’t all that bad, but the funeral home, packed with people, was on the verge of uncomfortably hot. Vincent only knew one reason a person would cover up so much—Dimitri was hiding something.

“Anton’s a liar and a bully, you know. You can’t trust him.”

“So says the addict,” Vincent ventured.

Dimitri’s eyes went wide for a moment, then he glanced across the room at his twin. “My brother been sharing fond family memories?”

“Anton hasn’t said two words about you,” Vincent said, hoping to put a dent in that cocky exterior. “I figured it out myself. You’re wearing long sleeves in summer. It’s not rocket science.”

“Touché.” Dimitri pulled out a packet of cigarettes, lit one, and leaned back against the wall.

“Can’t I?” He took a long drag off the cigarette, held the smoke in, and then puffed it out slowly. “Guess we’ll have to go outside, then.”

Vincent glanced over at Eric.

“Oh, I forgot. Puppy has to ask permission.” Dimitri ruffled Vincent’s hair. “You want me to go ask Big Bad Eric if I can take you for a walk?”