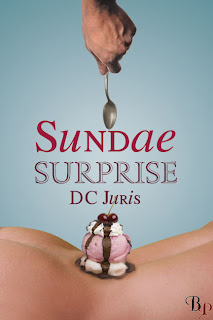 Dean learns the true meaning of the words "playing with your food" when his hot and hunky roommate, Rick, interrupts his plans for some solo Sunday afternoon fun. Human sundae aside, Dean discovers a kinship with Rick that he never knew existed, and a basis for what promises to be a delicious relationship. But when Rick overreacts to Dean's nonchalance after their first time, can Dean convince Rick that what they have is real?

Dean stood at the kitchen counter, restlessly tapping his left foot on the tile floor, barely able to contain his excitement as he emptied out the plastic grocery bag. Nice, ripe cantaloupe—check. Bottle of Red Cat wine from his last trip to New York—check. He grabbed a pewter goblet down from the cupboard above the counter next to the sink and poured himself a drink before he went about the rest of his preparations. He had seen this idea on a masturbation website a cou- ple months ago, and had been dying to try it ever since. What better day to treat himself than today, a lazy Sunday afternoon. Even think- ing about what was to come, no pun intended, made his cock hard and his jeans uncomfortably tight.

He’d felt a little silly asking all the women at his office what he should use to make a hole in a cantaloupe, but his explanation of turn- ing several of them into candleholders for a summer party had been absolute genius. Of course, now he would have to remember to make the damned things if he ever did have a party!

“Measure twice, cut once,” he muttered, as he carefully made a hole in the melon, using the corer and the v—shaped cutting knife he’d ordered from his sister’s Pampered Chef party. Oh, if she’d only known!

All smiles, Dean headed to the living room with his cantaloupe and glass of wine. He pulled out his favorite porn flick: the one with the longhaired guy who bore a striking resemblance to his roommate Rick. He popped the DVD in, doffed his t-shirt and jeans, and frowned. He wasn’t too fond of the so—called ‘vintage’ couch, but Rick would kill him if he got any stains on the thing. He didn’t know if cantaloupe would show up on orange, but he wasn’t going to take any chances. He pulled a tan velour blanket from off the back of the couch and laid it down over the cushions, then settled.

“Mmm...Rick...yeah...suck me....” With his other hand, Dean slid the cantaloupe onto his throbbing cock. Perfect. Fit. Dean gasped and rocked his hips as he closed his eyes, imagining the flesh of the fruit to be that of Rick’s mouth. “Yeah...feels so good, Rick...”

Dean’s eyes popped open and he fumbled with the melon, even- tually dropping it onto the wood floor with a splat—thud. “Um... nothing.”

“Are you jacking off with a cantaloupe?” Rick stood just inside the living room, arms crossed, a grin the size of Texas splitting his face.