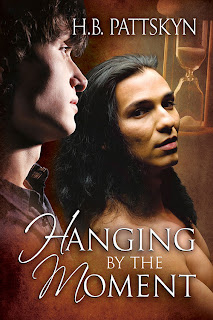 First and foremost, I want to give a huge thank you to DC Juris for letting me invade his blog today to talk about my new book, Hanging by the Moment. It came out on September 6, from Dreamspinner Press and I am over the moon about the initial reception and reviews I’ve gotten for it. All books are special, but this one is very close to my heart.

One of the things Dianne over at Live your life, buy the book said (and I’m paraphrasing) was that at one point there was so much getting thrown at Pasha that it seemed really overwhelming—and then she realized that that was exactly the way life could be sometimes. I love that particular comment because one of the things I try hard to portray in my writing is that nothing happens in a vacuum.

Yes, characters, just like people, meet and fall in love—but the world doesn’t stop turning, life doesn’t stop happening around us. We still have to buy milk, cook dinner, pay the mortgage, and clean out Kitty’s litter box. We have to deal with siblings and friends and parents. So in that respect, there are a lot of threads to Pasha and Daniel’s story. There are the big ones, Daniel’s HIV status and the fact that Pasha is closeted—and even when he does come out of it, there’s a price to pay. His family is very conservative and while some of his friends are supportive, Pasha discovers first hand exactly how not-okay some people are with homosexuality.

There are also lots little things going on in Pasha’s life: difficult co-workers, family fights, dieting (which is really hard because when things go south, Pasha tends to reach for the ice cream.) In short, life is complicated—but as Daniel points out, everyone’s life is complicated; it’s what you do with the complications that count.

Rather than the usual written excerpt, I’d like to invite readers to visit danielandpasha.blogspot.com, where I’ve recorded two excerpts, one from chapter one and another from chapter eleven. (They’re also on YouTube, because Blogger was being persnickety and didn’t seem to want me to upload them directly from my computer to Daniel and Pasha’s page—but as the saying goes, there’s more than one way to skin a computer. *G* Sorry, I don’t like the idea of skinning cats, my computer on the other hand, is occasionally on the wrong end of my temper.)

I also invite readers to comment here—because anyone who leaves a comment on any of the stops along my blog tour will be entered to win the big prize at the end: a signed copy of Hanging by the Moment and a bag of cool swag. Please make sure you leave me a way to contact you.

Pasha Batalov has lived his whole life doing what a good son is expected to do. He dropped out of school to help run the failing family restaurant, and ever since he’s put up with his difficult business partner, who also happens to be his father. And, of course, he keeps his sexual orientation a secret from his conservative, Russian family. After being closeted costs him his first serious relationship, Pasha resigns himself to one-night stands and loneliness.

But a chance encounter with lost delivery-truck driver, Daniel Englewood, has Pasha questioning all of his assumptions about life. Daniel is sweet, funny, smart, drop-dead gorgeous—and for the last six years, he’s been living with HIV. Pasha worries that he won’t be strong enough to help Daniel if HIV turns to AIDS, but he can’t walk away from their deepening attraction. He also doesn’t know if he can be strong enough to face the hardest task that a relationship with Daniel demands: coming out to his family and friends, and risking losing everything else he holds dear.

I’m donating twenty percent of my earnings from Hanging by the Moment HIV/AIDS awareness charities, and it was directly because of the research that I did for the book that I decided to start volunteering with AIDS Partnership Michigan (http://www.aidspartnership.org/). Giving money to something I believe in is relatively easy, giving my time takes more effort and that means something to me.

You can read more about Hanging by the Moment on my website (http://www.helenpattskyn.com/p/hanging-by-moment.html) or at the Dreamspinner Press site (http://www.dreamspinnerpress.com/store/product_info.php?products_id=4161)


Thanks for stopping by and thanks again to DC Juris for having me!