This one originally appeared on www.sizzlinghotbooks.net, which appears to now be http://sizzlinghotbooks.com/, but I can't find the post. So, I'm sharing it here! It was originally written for the Back to Smut Bash, which happened Sept 2, 2011 through Sept 7, 2011.

THIS POST IS NSFW (NOT SAFE FOR WORK)!
YOU HAVE BEEN WARNED!!
(no, really - there's sploogy cock photos)

Disclaimer: I did not take, nor do I own, the photos used in this post. At this point, I don't even remember where I got them (it's been going on 2 yrs now, folks). If these photos are your property and you want them removed, please e-mail me at dcjuris@stny.rr.com and I will comply immediately.

So. Back to Smut, eh? Well, count me in! I mean, who doesn't love smut? Obviously you and I both do, or we wouldn't be here, right? In trying to pick my topic for today, I realized I've got a couple things to talk about.

First of all, let's talk about cocks.

Okay. I know what you're thinking: What the hell does a pre-op transgender guy know about cocks? Oh…you weren't thinking that? Well, ya are now, aren't ya?  But seriously, though, it's no secret (or I try not to make it one, anyhow) that my ::ahem:: junk isn't "real." But that's precisely one of the things I want to talk about: strap-ons.

This one is mine:

Yeah, didn't think you'd get to see a writer's dick today, didja? It's a plus size harness (because I don't skinny dip—I chunky dunk), and yes, my cock is purple. I have other toys, and even other strap-ons, but this one is my favorite. Like some transmen, I'm comfortable using both my "natural parts" and my purchased ones, but I have to say, I like my purchased ones better. And here's why:

So, why don't more stories involve strap-ons? I honestly don't know. I've gotten a lot of feedback from readers about my transgender stories, which feature Derek, an FTM (female to male) transman. Many of my now die-hard readers initially read my first work "Even Guys Cry" with a little bit of hesitation. Some of them had never read stories involving a strap-on, and they weren't sure how sexy that could even be, what with one of the participants unable to really feel anything physically. But overall, they love Derek, and even the staunchest of "I only read regular m/m" readers has confessed to forgetting Derek's not an "anatomically correct" male. Which just goes to prove that if the sex is written well, it doesn't matter if his cock is flesh and blood, or latex.

The only drawback is that lack of physical sensation. I don't feel if my partner is tight or hot or anything like that. But the other side of that coin, is that, taking away my sensation leaves me completely open to my partner's. And there's nothing hotter or sexier than watching your partner's reactions, knowing you're the one in control of them, the one making them happen, and knowing they adore you for it. 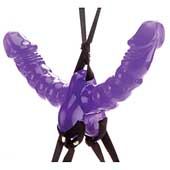 That's the key. That's the importance of the strap-on, at least for me. And if you're not convinced by now that a strap-on can be sexy? Go buy one and watch your lover give it head. ::raises an eyebrow:: You can thank me later.

We all know cocks get a lot of attention, and they should. After all, they're beautifully shaped, soft and hard at the same time, and they're able to simultaneously give and receive pleasure. What's better?

Writers spend a lot of time extolling the virtues and of the cock. Seems like every story contains at least one velvety head and one smooth, hard shaft being worked to an explosive, mind-numbing climax. But what about the creamy middle? 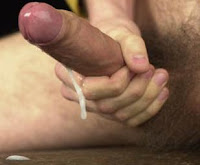 Just as much as I want to know how long and thick his cock is, I also want to know what his sperm is like. Is it thick and ropy, or is it more liquid and thin? Is it mostly clear, or is it white? Does it sputter out, arch gracefully into the air, or dribble up and down over a hand and wrist? What about taste? It's a proven fact that what a man eats affects how his ejaculate tastes.  Is his sperm sweet? Salty? Bitter?  Does it smell like anything?

And I wish characters played with semen more. What's more flattering and hot than a lover who likes to dip his fingers in the cookie jar now and then?  Semen: It's not just for swallowing anymore. ::grin::

Email ThisBlogThis!Share to TwitterShare to FacebookShare to Pinterest
Labels: Back to Smut, not safe for work, NSFW, recycled post, smut, sploogy cocks