Duckapalooza 2013: The Ducks Who Started it All

I have a confession to make - collecting rubber ducks wasn't anything I'd ever considered. Sure, they were cute, but I was an adult, took showers not baths, and really...what was the use of them?

And then, in 2005, a bundle of toothless aggression named Ginger came into my life. 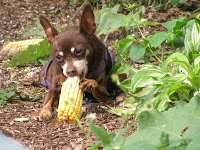 Ginger was a Min Pin who had been beaten and left for dead. The local animal control people brought her to my clinic, and the on duty doctor said we might as well let her go - just ease her passing and let her be at peace.

And then something happened. This little dog - beaten, bloody, bruised, emaciated, with her insides herniated - lifted her head, turned it, and looked right at me. Right in the eye. I knew she wasn't done.

Our surgeon agreed to try to save her - at the very least, she'd be under anesthesia if she slipped away, or if she truly couldn't be saved.

Two days later, Hubby came in to see the little dog who had stolen all our hearts. He went to the cage door, stuck his finger in to pet her nose, and whispered, "Well, hello, sunshine. Aren't you a pretty little ginger girl."

Several months later, she came home to live with Hubby and I. Despite massive damage to her spine and neck, Ginger had two speeds - go and asleep. Toys were a bit of a mystery to her (we figured she'd been a kennel breeder dog - used for popping out litters and never allowed to play or be a real dog). Stuffed toys didn't hold her interest - with no teeth she couldn't really do anything with them. We tried plastic toys, but those seemed to hurt her gums.

Then, one day at at thrift store, Hubby had an epiphany - he brought me a Cookie Monster toy and simply said, "baby toys!" I knew exactly what he meant.

Cue the rubber ducks. Lots and lots of rubber ducks. She didn't destroy any of them, so they mounted up. Every now and then we'd weed some out and get some more. Our house was, from that point on, filled with the sound of "squeaka-squeaka" of her gums on rubber.

In 2007 she developed acute heart failure. If you think she slowed down, think again. She kept going at 300%, often to her detriment.

I went through the house and picked up all her toys and bought a little trunk, put them in, and haven't looked in there since. Until tonight.

I thought it only right to pay tribute to the driving force behind the ducks. You see - I've kept collecting them. It's my little way of keeping her fresh in our minds. Every duck reminds me of her, and every time I buy one, I think about if she would've liked it or not. She especially liked ones with odd angles or with things sticking off them - like hats and whatnot.

So, tonight I share with you the remaining ducks - the ducks that launched a collection. They're back in the little trunk, tucked away safe where they belong. But they - and everything in there, still smell like Ginger. And yeah... I cried a little. :-) 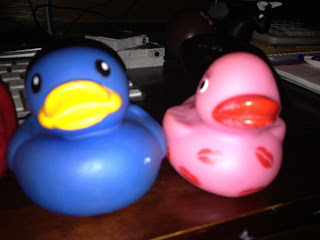 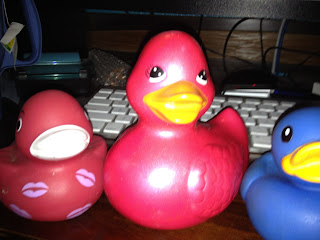 And this is the first duck I bought after she passed. Somehow, a devil duck just seemed appropriate for her. ::grin:: 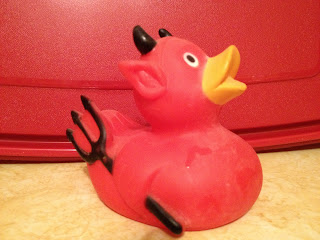 Email ThisBlogThis!Share to TwitterShare to FacebookShare to Pinterest
Labels: Duckapalooza 2013, Ginger, rubber ducks, the ducks who started it all