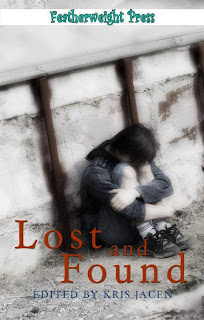 In the Fall of 2012, DH Starr approached Featherweight Press about publishing an anthology that he was a part of. It was a special project being organized by Michele Montgomery. All the authors wanted to donate their royalties from the anthology to charity. They wanted the monies to go to a specific cause---they wanted the money to go to a charity that worked with LGBT homeless teens.

The inspiration for the anthology was a picture that they had seen with the text over the image that said "40% of homeless youth are LGBT. The #1 reason they're on the streets in family rejection."

Here's more information from Kris Jacen - "Once we got to final editing stages we realized, we didn't know WHICH charity to donate the monies to. There are so many great charities out there working with LGBT youth that we weren't sure which to choose. We wanted to make sure that no matter how much, it would make a difference. So the search was on.

I was pleasantly surprised to come across one that had the name of the anthology almost exactly---Lost-n-Found Youth, Inc. It seemed like fate talking to me and after speaking with one of the board members, I was convinced of it. You see the board member told me that the day before we spoke, they received a call from a teen that had been on vacation with his parents and when they found a gay romance on his eReader, they left him on the side of the road. Yes, you read that correctly, abandoned him for reading a gay romance.

Our hope is that with these stories, these teens realize that there are many out there that care about them. That no matter what anyone says---THEY MATTER."

I'm proud to have my transgender YA story, "Thrown Away" included in this anthology.

Sixteen and homeless - something that happened to other people. Other kids. Surely not him. Jeremy feared telling his parents he was transgender - that he wanted to be Katherine - but he never expected to be thrown away. When a cabbie takes pity on him and takes him to a local homeless shelter, Jeremy finds out that being Katherine isn't going to be easy, and comes with dangers she can't even fathom. Just when hope is lost, a mysterious woman name Donna enters the picture. But is Donna all that she seems? Or more?

I glanced up at the house as I walked up the cobblestone path. I loved that house when I was little. Now...not so much. A big, sprawling thing with dark, hardwood floors and built-in bookcases, a deep farm sink in the kitchen with a window just above it framed by frilly, red-and-white-checkered curtains. Going inside was like walking into a magazine. Everything in there was just so—my mother made certain of that. Everything, I guess, except me.

It had been three months since I’d brought up the word transgender. I’d been clever about how I’d done it; told my parents that a friend of mine thought he was trans, thought he wanted to be a girl, and asked them if they knew anything about it, what it meant. Played it cool, you know? Played it dumb. I didn’t want them realizing my friend didn’t really exist, and that I was the one with the doubts and questions.

Mom and Dad had said they didn’t have a clue what it meant. Dad had asked if it had anything to do with being queer, and how could someone my friend’s age even know anything like that about themselves? Mom said that sixteen was almost an adult, and anyway, maybe the boy was mature for his age, like me. I’m sixteen, and Mom thinks I’m mature for my age because I knew my alphabet before I entered Kindergarten, and I read high school level books in sixth grade. Maybe she’s right, but most of the time I feel like an idiot.

I stopped just before reaching for the door handle and looked up at the attic window. Just past that window, in the back, over in the far left hand corner was a beautiful old dollhouse. It wasn’t mine. It was in the house when we moved in. I asked my mom about it once and she just avoided the question, which pretty much convinced me that there was something special about it. I used to sneak up there, when I was a little boy, and play with it. I loved the vibrant colors—the pinks, purples, and soft yellows. I loved the details—the scrollwork above the door, the working shutters on the windows. But most of all, I loved how it made me feel. I felt delicate and dainty. Pretty.

I took a deep breath as I opened the door and walked inside. Mom already had dinner ready. I glanced at my watch. Five o’ clock on the dot. She always had dinner ready at five o’clock. I took a whiff of the air as I walked past the kitchen. Smelled like pot roast. Great. I was about to spoil Mom’s perfect pot roast.