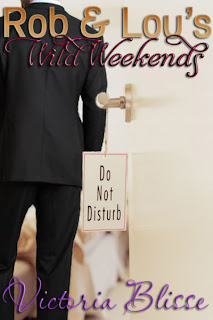 Introduction to Rob and Lou.

Robert Nimble is thirty-five years old, he’s tech support for a large Internet host, and loves to play computer games to relax. He’s married to Louise Nimble, who’s a child minder, and a year younger than her husband. She bakes to unwind. Taking the old adage that stressed is desserts spelt backwards to heart.

Robert and Louise are more often known by the shortenings of their names—Rob and Lou. They’ve been married for ten years and have two children: Connor, who is six, and Elizabeth, who’s four. They live in a terraced house in a suburban outskirt of Manchester. As a family, they enjoy their yearly week-long holiday to Scarborough, and visits to the cinema to watch films that the kids and adults giggle at in equal measure. In the school holidays, they’ll often be found in museums and parks, enjoying the culture and the beauty of Britain.

They’re a smiley family, although Rob can get grumpy when his tech genius isn’t taken seriously enough, and Lou may have the patience of a saint with children, but more than two hours with her in-laws has her pulling out her hair. The children are mostly well-behaved, with an inclination to the curious, and the mischief that goes hand in hand with that. If they do run into the back of your legs, or scare you with their latest pet insect, they will apologise politely and you’re likely to instantly forgive them.

Rob and Lou’s Wild Weekends are just that, so hold on and enjoy the ride.


Blurb: Hold on tight, it’s going to get wild! Rob and Lou could pass you in the streets and you’d likely not notice them. They’re in their thirties, have a family and jobs to hold down and they do it with smiles on their faces. But occasionally they get a little time off and that’s when things get seriously sexy.

It was only a small parcel in a typical brown padded envelope. It wasn’t expected, which is why I spent so long looking it over. The return address didn’t ring a bell, and I really couldn’t imagine what it could be so, finally, I opened it. I grinned to myself as I did. My husband Rob would have laughed at me, spending so long looking at the wrapping and wondering. He doesn’t get why I like to eke out the anticipation in moments like this.

Inside was a square of white with a lacy frill all around it. When I opened it up, I found ties –it was a pinny. Inside the parcel was a sealed envelope. I opened it to find a card covered in small red love hearts.

PS Kids are going to my mum’s for tea tonight, so don’t worry.

I recognised my husband’s handwriting immediately and chuckled when I remembered a conversation we’d held in a restaurant once about pinnies and their attractiveness. Well, Rob had been staring at this red-headed waitress (he loves auburn hair) with cute curves and pouty lips, and I had to pull him up on it.

“Pinnies?” I lifted one brow and pinched his thigh under the table. “You’re turned on by tiny little aprons?”

“White ones with lacy bits,” he replied, licking his lips salaciously.

That night, I whispered dirty sweet nothings in his ear while we fucked in the comfort of our hotel room bed. I told a story where I was a simple girl, waiting on tables in a quaint old tea shop, wearing a little lacy pinny. I giggled. He chuckled, but as my tale got hotter, the noises we made became strangled and lust-filled.

“You watch me until the end of my shift,” I whispered, hunched over him, my soft thighs stretched around his waist as his hard erection filled me. I moved gently up and down and continued the tale. “Then follow me outside into the alley. Before I can cry out, you clamp your hand over my mouth and push me roughly against the wall. I struggle helplessly but you hold me down and whisper about knowing I want it. How I’d teased you and how I would get what I’d been asking for.”

I still remember how he gripped my hips tightly when I rode him. I continued my story through groans of pleasure.

“You spin me around, press me into the harsh brick of the wall, and pull up my skirt. Grabbing hold of my prim pinny, you fuck me. I’m soaking wet, so you slide right in. You fuck me there in an alley, the girl you just met, the girl you hardly know.”

My words turned into unintelligible mumblings at the point where ecstasy took over. And ever since our holiday, with the visit to that restaurant and the evening’s tale of indecency in an apron, we’ve found a mutual fondness for the uniform of waiting staff and hotel workers alike. So, if Rob wanted me naked in nothing but a pinny for Valentine’s, that’s what he could have.