Well, isn't he festive? Wouldn't mind finding him under my tree. ::wink::

Let's see... for my part in the hop today, I'll give you a snippet of your prize - my steamy m/m/m, "Perfect Christmas." One lucky commenter will win a free pdf copy! See the end of this post for information on the Grand Prizes! 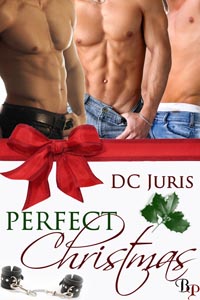 “Unzip me,” Mike whispered. “Please. I’m so hard from listening to you two.”

Evan blushed brightly and faltered. Of course logic told him Mike had heard, but the reality of it made him weak with excited need. His insides did flip-flops and his cock hardened more.

“You make the most beautiful sounds,” Mike told him. “I can’t wait to hear you make them for me.”

Drake groaned and crawled forward on the bed. He straddled Mike’s chest, bent down for a kiss as Mike’s hands slid up his legs to fondle his ass.

Oh, that was too much! Just unfair. Jealousy rose up in Evan, broke against him like waves on a rocky shore, but he couldn’t look away.

The sight of those tanned hands moving over Drake’s fair, creamy flesh was something he knew he’d never get enough of. He reached for the zipper again, this time succeeded in lowering it. Drake turned his head at the sound, and the lust Evan saw blazing in his eyes nearly stopped his heart.

Mike’s cock flopped out and he sighed. “That’s better. Was starting to get cramped in there.”

Impressively long and thick, the tip just sparkling with precum, Mike’s cock jutted up from his body like an arrow, hard and straight, pointing right at Evan. Evan’s mouth watered. He licked his lips slowly, gathering his courage. “It bet it’s a little sore.”

“I could rub it for you.” He trailed his fingertips over Mike’s shaft as Drake, breathing heavily, looked on.

Mike let out a hiss, hips jerking up at the touch. “I’d like that. It’s certainly sore.”

“Might need a lot of rubbing,” Drake suggested, reaching his own hand down, his fingers brushing Evan’s.

Evan nodded and slipped his hand under Mike’s cock, wrapping his fingers around and rubbing along its length with his thumb. Drake added his efforts, massaging the head with his thumb and forefinger. “How’s that?” he asked.

“That’s much better. Feels really good.” Mike sat up on his elbows to watch. “Looks really good, too.”

“It does,” Drake agreed, eyes on Evan. “I love watching you touch another man’s cock. I didn’t think I would. I thought I’d see red, but, damn, baby.”

“Yeah?” Evan raised an eyebrow. Earlier hesitation gone, an idea sprang to his mind—one that almost made him whimper. “What if I do this?” He lowered his head and licked the tip of Mike’s cock, making sure his tongue contacted Drake’s fingers as well.

Mike and Drake let out simultaneous moans of pleasure; Mike’s head fell back and Drake reached his free hand down to stroke his own cock. Evan kept up his attentions, licking and slurping as though Mike’s cock were an ice cream cone, making loud, appreciating noises, until Mike suddenly grabbed hold of his hair and tugged.

Drake abandoned both their cocks and took Evan by the shoulders. “Time for your present, baby.” He glanced at Mike. “You bring the accessories?”

To enter to win, just leave a comment below.

There will be a grand prize worth over $100 in value, which includes 11 eBooks and $60 in eGift Certificates: 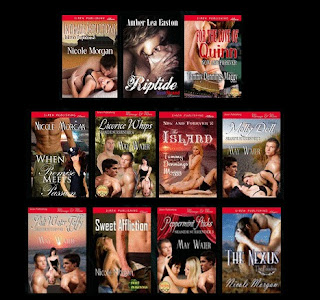