Merry Christmas! Or should I say, Blissemas!

I thought I'd share with you one of my favorite holiday movies. Now, I know what you're thinking - you've already heard all about A Wonderful Life. But that's not what I'm talking about. Nope.

I'm talking about this: 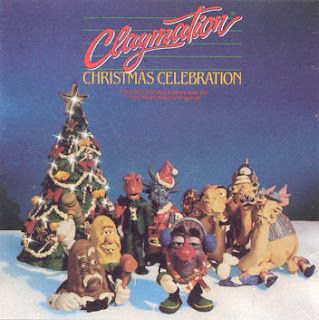 That's right - A Claymation Christmas Special, and yes, those are the California Raisins.

My favorite part is actually an ongoing thing. One of the co-hosts Rex, a rather smart T-rex, futilely attempts to clarify the true pronunciation and meaning of the term 'wassail', featured in the Christmas carol Here We Come A-Wassailing. As the show progresses, Rex is dismayingly accosted by different groups singing the song, though each version is lyrically incorrect.

Finally, near the end, a truck carrying townsfolk arrives on the scene, and they are singing the correct version of the carol, validating Rex's theories much to his delight. After one of the townies explains the real meaning of wassailing—going around the neighborhood singing Christmas Carols, and getting treats and cordials, the entire cast performs Here We Come A-wassailing, and then We Wish You a Merry Christmas as the end credits roll.

It's full of some absolutely hilarious characters, too. There's walruses and penguins doing ice ballet, The California Raisins, of course, the three wise men have singing camels, and The Carol of the Bells is performed by bells who smack themselves in the heads to get sound. It's just really, really great fun!

Speaking of great fun, for my prize today I'm offering up a free pdf copy of my lovely little m/m Christmas Themed story, "The Best Kind of Prize."

Alan takes the reins on planning a secret holiday getaway, but Jack isn't overly thrilled with being kept in the dark about their destination. Unbeknownst to Alan, Jack has plans of his own - plans to ask for Alan's hand in marriage. When an argument and Alan's disappearance get in the way of Jack's romantic intentions, is their holiday ruined, or can Alan make things up to Jack in time to still have a Merry Christmas?

To enter, just leave a comment below with your e-mail.

**ALSO** You could win the Blissemas Kindle Fire! Simply leave a comment on this blog and all the others listed at blissemas.co.uk, and for each comment you'll win an entry into the draw! Please note only one comment per person per blog will be counted. Please check out http://blissemas.co.uk for terms and conditions