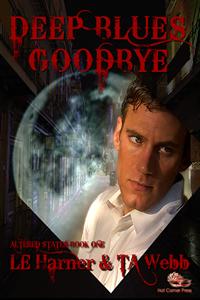 Two things you should know before you read this review.

1. I don't normally read m/m romances. Why? A couple of reasons. One, I don't want anyone else's ideas to weasel into my brain and subconsciously come out in a story I'm writing. And, two, I don't have time. I have a full time Evil Day Job, the writing gig, a husband to take care of, and seven furkids. If I'm taking the time to sit down and read a book, it better be damn well worth the read…and so many aren't.

2. I don't normally write reviews. Why? Well, let's just say the phrases "the only redeeming quality" and "I almost didn't finish this" come up frequently when I write a review. So, as the old adage goes, if you can't say something nice…

That all being said, this is a rare instance where I'm really pleased with the book, and the review will be good, and since that's the case, I'll go ahead and share.

I've just finished "Deep Blues Goodbye" by Laura Harner and Tom Webb. I have to admit, I've never read anything of Harner's, and the only reason I bought it was because Tom Webb had a hand in it. I've read one short story of his – a flash fiction type thing – because he is a new reader-turned-author and I was curious. Lots of readers think they can write – some of them can, some of them can't. Tom Webb absolutely can. I was really, really impressed by the flash, so I decided to grab this one and see what it was like. I'm never certain about reading collaborative material. In my opinion, Jaye Valentine and Reno MacLeod are the absolute masters at collaborative stuff, and not many others even come close.

The writing flows smoothly – there are barely any hitches that made me wonder "who wrote that part?" because the styles appear to be so similar, you just don't notice it.

I found only one or two typos, and neither were enough to jar me out of the moment. In fact I can't even remember where they were, they were that insignificant. (And yeah…sadly I do usually remember.) No "wrong name" confusion, no overly repetitiveness. The sex scene is very well done, very hot, and descriptive enough without making that "bow-chika-wow-wow" music go off in your head while you read it. I do prefer a little more sex in my stories, but then I'm a smut writer, and this is definitely not a smut book.

The book is set in New Orleans and, having been there, I can attest that the descriptions are spot on. They did a fine job of capturing the mood of the city.

The plot moves a little slow for me, but I don't typically read this sort of book, and I wouldn't have had Webb not been attached to it. Murder, mystery, intrigue – not really my thing. But again, I'm a smut writer. LOL I'm told, by a reliable source who loves this kind of book, that the pacing is "actually really f*cking good." And that's a high compliment from them.

That said, I really did enjoy the book. Typically I'd skip around in this sort of book, but I didn't feel the need for that. The writing was done well enough that it kept me engaged. The technical aspects seemed very sound, as well. No spots where I raised an eyebrow and went, "I really don't think that's how it's done."

The writing felt natural and organic – nothing felt forced. The dialog between the characters rang true to what I'd expect from what information I'd been given. I hate when dialog doesn't fit a character. There weren't any large moments of "telling."

Near the end, I kept glancing down at the page count, thinking to myself, "Bear, you bastard, you're going to cliffhanger this, aren't you?" And yeah, it's a cliffhanger. Of sorts. You know which general direction the story is going to go, but not which road, or what bumps/potholes will be along the way.

Second, the gooey of it all. (The gooey being the stuff in the middle – the stuff that actually makes you want to keep reading the book.):

The characters are well written, with enough background that, even though I hadn't read the other book in the series, I knew who they were, how they were connected, etc. They were real enough that I felt emotionally invested in them. And the tension between them was almost palpable at points. Enough that I wanted to smack the crap out of one of them more than once.

I liked the way the vampires and werewolves were portrayed. I enjoy settings where supernatural creatures and humans live together. Why? Because I'd like to think that humans can rise above and show understanding and tolerance. Speaking of that, there's absolutely a balance between the characters. It's not all rainbows and fluff for the supernatural folks, and not everyone jumps on the bandwagon. It's done very realistically. The vampires are realistic. No one sparkles. And the werewolves??? Holy. Hell. Yeah, the werewolves are sexy. Sign me up for a bite from that pack.

But if you are a friend of Tom's you really should read the book, if for no other reason than the nod. You'll absolutely get it without any hinting, and when you do, when you get there, your heart will stop for the briefest of seconds and you'll whisper, "Oh…" And you'll pause on that page for a while, just staring at the words, and it'll take you a second to go forward. Trust me, it's worth it.
Posted by Marci Nichelle Jansen at 11:32 AM