Is that a rock in your pocket??

Actually, yes, it is. 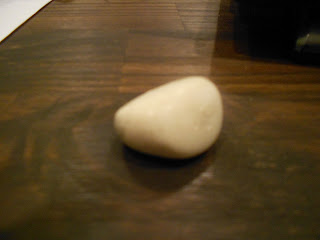 But it's not just any rock. This is an actual bladder stone one of our doctors removed from a two-year-old Bichon named Phoebe earlier this year. Yes, it's as big as it looks. It measures a little over an inch long, by almost half an inch tall, by just about an inch wide. Yes, it's abnormally large for such a small dog.

Why is it in my pocket?

Number one, I just think it's really cool. It's smooth and shiny (it came out that way, I didn't buff it) with only a couple little marks of "wear." It's a little discolored now, since it's been rambling around in my pocket for months.

The bigger reason I keep it, though, is to serve as a reminder to myself that we don't always know what's on the inside. I have two ways of looking at that - one, you don't always know what someone is suffering with, internally, be it physical or emotional. You see outward signs and symptoms, and you can make an educated guess, but you never know if the problem is larger than you think it is, or larger that it typically is.

The other way I look at it, is - we only see what people want us to see. I especially need to keep this in mind in regards to places like Facebook. People show us what they want us to see, what they want us to believe of them. Facebook is a playground for the manipulators among us, and I have trouble keeping in perspective that, just because someone seems like they're my friend and they care, that doesn't mean they really do.

So I keep this rock in my pocket, to remind myself to think about what's potentially deeper.