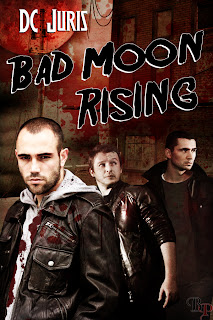 Bryce never expected to find himself smack in the middle of a zombie apocalypse, and he certainly never expected to meet the man of his dreams along the way. But there's more than zombies in the way of his happily ever after. Richard comes with baggage, in the form of his on again, off again bipolar lover Cole, who is off his meds and descending into his own mental hell at an alarming rate. Will the three men be able to work out their romantic feelings? Oh yeah...and then there's that little issue of the zombies...


I jerked awake to the sound of glass shattering. A quick glance around told me it wasn't our window, but something outside, nearby. Fuck! The car! I jumped up but Richard caught my arm and yanked me down next to him.

"What's going on?" I whispered.

"Looters," Cole revealed. "They're going up and down the street, searching cars."

Well, at least they wouldn't steal it, since we had the keys, and the chances of them sticking around to do any real damage to it seemed pretty slim, too. All we had to do was wait it out, and they'd go away.

Dolly stood and paced to the door, walking back and forth in front of it like she was on guard duty.

On the street, yelling broke out, and gunshots echoed in the night. Richard cursed.

Our visitors had apparently been discovered. Shouts of run and look out descended into just inarticulate screaming and then the unthinkable: Dolly started barking.

Cole lunged for her, but the damage had already been done. The people outside started banging on our door, pleading to be let in. "What do we do?" I looked to Richard, who was shaking his head.

"But if we don't let them in, they'll be infected," I argued. Those were people outside--we had to help them. What if the roles were reversed? What if that had been me outside?

"And if we do let them in, we'll be infected." He reached for one of our backpacks and started shoving things inside. "We can't stay here. Cole, shut that damned mutt up!"

"I'm trying!" Cole struggled with Dolly, trying to get her calmed down and quiet.

Richard shoved a bag at me, hitting me square in the chest and bringing me back to reality. "Pack light. We'll be walking."

"Is compromised. We'll never get near it. Hurry up. Cole!"

Cole scrambled back to us, dragging Dolly behind him. Outside the shouting and banging intensified. Someone must've gotten smart, because a brick came careening through an exposed part of the door glass near the top. It sailed through the air, barely missing Richard's head.

"Time to go!" Richard shoved Cole toward the back door. "Bryce, help me with the boards!"

I grabbed up a discarded hammer and handed it over to him while I fished in my bag for the crowbar I'd brought. We struggled with the boards, hacking and pulling. Richards face turned red with his exertion, and I felt the warmth of my own efforts spreading out from my arm muscles, making my chest tight and painful.

"Hurry up, guys!" Cole shouted.
Posted by Marci Nichelle Jansen at 12:00 AM