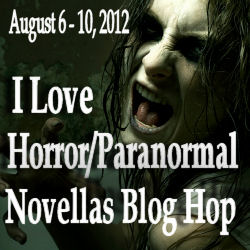 Oy! I'm late getting this posted - but I only signed up last night!

I've always had a fondness for horror and the paranormal. I'm not one of those people who gets all weepy/sappy at movies, and I don't want to sit through two hours of getting to know a character only to watch them die of some horrible disease. I'd much rather sit through five minutes of getting to know a character, and spend the remaining 115 minutes watching them try to outrun some big, scary bad guy, or some plague.

As far as the paranormal aspect, I've always believed in ghosts and creatures of the night. The house I grew up in was haunted by a very friendly presence we eventually name Percival. When it comes to werewolves and vampires and the like, I think that, just because I haven't seen it with my own eyes is no reason to believe it doesn't exist.

In my own writing, I dabble into the paranormal from time to time. I have a couple vampire stories out there, and my werewolf/werecat novella, "Omarati" with the follow up, "No Place Like Home."

For my hop prize, I'll be offering up a free pdf copy of "Omarati' to one lucky winner! Entering is easy - just leave a comment with your e-mail, and tell me what your favorite paranormal entity is - vampire, werewolf, ghosts, demons, etc. - and why. Easy peasy!

Here's the blurb for Omarati:

Mateo turned. A dizzying, hot wind swirled around Calliph as his eyes locked with the man's amber gaze. Time seemed to halt, as the deck seemed to spin in a lazy circle, Calliph in the middle. His head felt heavy and wobbly; his neck and shoulders lacked the strength to support it.

Calliph struggled to make sense of what was happening as a jolt of recognition raced up his spine, even though he had never met Mateo. His feet seemed to move of their own volition, carrying him forward—answering a call he heard in his heart and felt deep in his bones. Made no sense, yet Calliph kept walking.

"Where do you think you're going?" Obyn demanded, tugging sharply on Calliph's leash.

Calliph's head snapped back and his steps faltered. Obyn. He had somehow actually forgotten about the jerk. "To see how it works." He recovered quickly. "With your permission, I'd like to learn the steering mechanism in the event danger should befall our voyage."

Obyn's eyes narrowed and he glanced at Mateo. "Fine. I expect you below deck in an hour."

Ba'Tal lead Obyn away, and Calliph closed the distance to Mateo. "May I?" He nodded toward the steering column.

"Be my guest." Mateo guided Calliph's hand. "Magic controls the orb. Feel that?"

Calliph felt something, but nothing to do with the ship. Mateo's hand on his burned. He fought against the desire to pull Mateo close and smother him with kisses. "What is it?" he asked, not referring to the mechanism.

"You're connected. The magic regulates the pitch of the ship. Left and right—back and forth. Keeps the deck level. Simple, really. You just have to get the feel of it." Mateo pressed his hand down on Calliph's and moved them both slowly from side to side. "There. See? Just a slow, soft touch."

Calliph wasn't interested in the orb—wasn't even looking at it. Mateo tilted his head toward him, bringing their lips inches apart. Calliph's mind reeled. Mateo had moved closer; his grip had tightened . . . his breathing had quickened. He felt it too. Calliph's gaze dipped to Mateo's lips, parted ever so slightly. Mateo must've licked them a moment ago, because they looked moist. Calliph imagined those lips were soft and warm as well. Oh, so soft and warm. Gods, he wanted to kiss them. Calliph's cock twitched and hardened and he marveled, almost having forgotten what an erection felt like.

Something nudged Calliph's leg, and he looked down. A tail. Mateo moved his head; his hair shifted, revealing the sharp upward curve of his ears. Cat though he might have been, Mateo's tail should've been nonexistent, and his ears should've been human ears. Calliph noticed other things then: the fine dusting of dark fur on the backs of Mateo's hands, the not quite feline but not quite human shape of his nose and his eyes.

"They're permanent," Mateo interrupted with a sigh and a frown, obviously used to being questioned.

"How?" Calliph frowned as well, knowing of no explanation.

Calliph snarled. "Alchemists did this to you?"

Mateo nodded and hung his head.

"Nothing to be ashamed of. Can you shift?"

"I can but not for long. The transformation is painful and leaves me exhausted."

That Mateo had shared such a fact with him thrilled Calliph. "You feel it too?"

Mateo's face flushed; he was panting, trembling. "I do. We're Omarati."

Omarati. An ancient term. No common translation existed; the best Calliph had heard was "soul mate." Far beyond that, Omarati were shifters who were created—literally created—for each other, drawn together by a bond unbreakable, unending. Animal, age, gender—none of that mattered, for Omarati were compatible by design, made to accept and overlook any flaws in favor of their bond. Their hearts and their souls knew each other already, even if their minds had a bit of catching up to do. A connection like this, as far as Calliph knew, existed between no other beings. Mateo's small hand slid into his.

"What are we going to do?" Mateo asked.

Calliph ran a finger under his collar. What indeed.