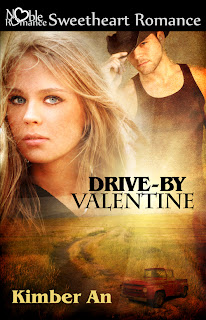 Blurb:
Pushing thirty on Valentine’s Day, Eve realizes her desperate search for love has led to nothing but misery.  Then, she takes a chance on a little old lady who’s famous for finding the perfect guy for every girl just by looking at his truck.
Excerpt:
Eve laid a hand on the highly polished brass doorknob, twisted, pushed, and stepped over the threshold alone. The smell of fine leather and oil filled her nose, and a little panic nearly made her step back outside. If her mother knew what she was up to, visiting this little antique automobile store the night before Valentine's Day, she'd just die. Going there was a desperate act, but the girls at work didn't know anything about the tiny town in the middle of nowhere that Eve discovered quite by accident. And if they didn't know, Mom would never find out. She planted her feet like trees and beheld the dazzling sight of an old car painted candy-apple red. Ropes made of a deeper red velvet, curtained the vehicle off from curious fingers.

"1926 Model-T," said a raspy-voiced woman. "My Tommy's first and still in mint condition."

Eve lifted her eyes and saw the hunched-back old lady standing behind an ancient, brass-trimmed cash register, which, undoubtedly, did not have any kind of scanner or other modern bells and whistles. Eve figured she better introduce herself. "My name is Eve and I . . . I'm looking for a . . . ."

"Husband. Yes, I know." The wizened senior had long, gray hair streaked with black and pulled into a beaded barrette. She wore a faded denim shirt and a gold, heart-shaped locket lay against her collarbone.

Eve felt blood rushing through vessels all over her face until her ears burned. The old woman came close to hitting the mark. Eve hadn't gone there looking for a husband, exactly, but a date for Valentine's Day sure would be nice.

"My name is Sofia." She hobbled around the counter on a cane.

"Italian, actually. Papa worked in a Lamborghini factory, and Mama smashed her Fairlane through the storefront because, she said, he was gorgeous." Sofia ran fingers over the hood of a pink convertible and then turned her attention to a dark blue Mustang. Both vehicles stood behind ropes, just like the Model-T.

"Oh." Eve took a few steps and scanned the store for a face-saving excuse for being there. Old, polished planks squeaked beneath her high heels, and the display cases shone with fine wood and glass. Chrome wheels and trophies from antique automobile shows hung on the walls. "I was driving through, when I noticed your sign."

"Uh huh. I see. What kind of husband are you looking for?" Sofia tenderly polished the Mustang's fender.

"I'm not . . . ." Eve's thoughts rushed back to the girls' chattering about their plans for Valentine's Day. She'd overheard Mary Alice tell Rachael that she'd bet five dollars Eve wouldn't have a date, that she'd probably be sitting at home, by herself. Silently, Eve placed her own bet; she'd find someone to go out with tomorrow, if it were the last thing she'd do. Then she'd left work early, claiming a headache, and driven aimlessly until she'd stumbled upon this tiny little town a couple hours outside the city.

"You won't find what you're looking for until you're sure of what you need." Sofia interrupted Eve's morose thoughts.

Eve focused directly on the old woman's eyes and decided to play dumb. What had she been thinking, going there? "I . . . I don't know what—"

"I think maybe you do. Otherwise, you wouldn't be here. We only need to draw it out. Tommy and I fell in love in that 1955 pink Cadillac." She nodded toward the convertible. "Papa was a mechanic, you see, and I always helped him."

Eve turned her attention from the Caddie to the wall of framed photographs behind the cash register. She studied the top portrait; black and white, the picture showed a grinning bride and groom standing before an old car just like the Model-T. Each picture below showed them aging together in front of yet another antique automobile, until finally, Sofia stood alone beside a gravestone in a cemetery, the Model-T parked in the background.

"We knew what we needed and we found it together." Sofia's statement brought the real issue into focus.

Eve tried to stop wringing her fingers and bit her lower lip instead. What would she like in a husband? "I suppose it would be nice to find someone successful and charming."

Sofia stopped polishing and looked Eve up and down. "That's what your girlfriends have, so that's what you think you need too. But, I don't think that's it at all."


Sound cool?  Well, what are you waiting for? Buy it HERE
Posted by Marci Nichelle Jansen at 8:00 AM