In 1985, shortly after my first story was accepted for publication in Blueboy magazine, I became friends with Dana, the photographer, graphic artist, and chief art editor. He was a jack of all trades and had a penchant for Latin men. In fact, when he started filming solos, then later graduated to duos, trios, and groups, I’d sometimes be on set watching him work. If I was really, really, really well behaved, Dana would let me oil up the models though that was usually his job. Only he got to oil up and only he got to fluff.

To try and get the models to relax, Dana would often chat with them before hand, during, and even after. On one such occasion, there was a particular young hispanic who was extremely inexperienced. Having only ever done hustling before doing print work, he was very self-conscious about the way he posed, even with Dana’s coaxing. So, after a while, he just closed his eyes and started thinking about whatever it was he needed to in order to…you know…make things work.

While busy stroking away, eyes shut tight in concentration, Dana asked in a soft voice what it was the young man was thinking of.

“My uncle,” he replied without skipping a beat, sounding as if he were hypnotized or under some sort of magic spell. Then he added, “My cousin. My brother.”

He went on to tell us of something that happened to him that was both appalling and thrilling all at the same time. Both Dana and I wondered afterwards if it had really happened but life being what it is, it probably did.

The young man’s story struck me and stuck with me all these many years later. In fact, I’ve always wanted to write about it but never did. Until now.

And so, “The Rosas of Spanish Harlem” was born.

Yes, I’ve carried the story around in my mind for 27 years. During that time the story has morphed and evolved into something extremely different from the original. In fact, it’s all different. There are very few similarities between the version I wrote and what supposedly happened to the young man Dana filmed. There’s a brother, and it takes place in Spanish Harlem. Aside from that, there are no other similarities.

One of the many things I find fascinating about writing is how one single planted seed can germinate, grow and blossom into something all of it’s own. Another thing I find interesting is how ideas transform themselves. I went from having the lead in the story be a young Latino male, to a caucasian man, and finally, to an 18-year-old high school graduate who liked to dress in girl’s clothing. Why? I don’t know. It just made sense that way.

I think once I started writing the story, even though it wasn’t meant to see the light of day -- it was originally only intended for me, to get me sparked again about writing -- Tracy wanted to explore his femininity. More importantly, Tracy didn’t want to be just another gay guy. He wanted to stand out and have the courage to be who he wanted to be no matter what.

In the story, like many of us, the young man is hellbent on losing his virginity except he doesn’t know how to go about it. But you know the old adage; be careful what you wish for?

Tracy winds up discovering something that, for many of us gay men of a certain generation was a fact of life: sex in public restrooms. As dangerous, frightening and repulsive as it sometimes was, discovering glory holes, foot tapping and all that other stuff that went on was -- for better or worse -- a rite of passage.

And isn’t it often the most dangerous, taboo things in life that attract us the most?

From that point on in, Tracy goes on an adventure through Spanish Harlem where the language is different, the music has a different flavor, and danger lurks in the most unexpected of places.

I don’t remember the name of the young man Dana filmed. I vaguely remember what he even looks like, though I can guarantee you nothing like the lead in this story. I only hope that -- if he’s still around -- he’s stopped being the victim, stopped living on the street, and found his very own happy ending.

Special thanks to DC Juris for not only having me, but also for encouraging me to submit the story for publication. 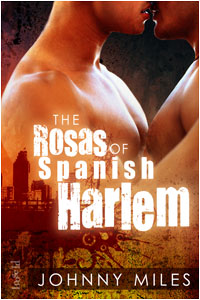 Blurb:
It’s summer of 1977 and sex is on Tracy McCarthy’s mind. He’s now 18 and hell-bent on losing his virginity when he spots Angel on the beach. After discovering restroom sex — and meeting the handsome Latino Angel Rosa again — Angel invites Tracy up to Spanish Harlem for more.

When Tracy makes the long trek by subway up to Spanish Harlem, he’s exposed to a vibrantly different way of living; one filled with spicy foods, rhythmic music, and sexually-charged men. Along the way, however, the waif-like, cross-dressing young man also discovers that on the path to finding what he seeks, dark and disturbing dangers lurk — in the minds of men, walking the streets, and in the hallways of Spanish Harlem tenements.