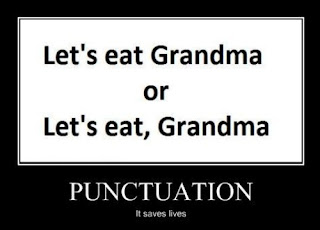 We've all seen this cute little picture thing about how proper punctuation saving lives. But what happens when even grammar can't save you??

Case in point: Back in 2001, I took a flight down to Florida to see my best friend graduate from college. I couldn't afford a flight back home, so instead I took a Greyhound. Worst experience of my life. What was supposed to be a 20 or so hour trip turned into two days. Customer service was non-existent. We missed our connecting bus out of Washington DC, and we were told there was another one we could get in 3 hours. When I asked the woman what in the name of Heaven I was supposed to do in DC for 3 hours, she smirked and said, "Well, you could go see the White House." I was not impressed. But it didn't end there. We got our new connecting bus, and the driver took us down a turnpike...right into the middle of construction. We sat on the road for hours. Literally hours. In the end, my husband ended up driving three hours down to Harrisburg, PA in order to pick me up the same day. Otherwise, we'd have been into day three. On the bus.

When I got off at Harrisburg, I went around to the luggage storage area of the bus, and asked one of the terminal workers to hand me my suitcase. I knew it had been tagged for Elmira, so I didn't want it to go any further. He got huffy with me, acted like doing his job was an inconvenience. So I snarked at him, "You people have been pissing me off for two days!"

It never occurred to me that the man was African American, and would take "you people" to mean I was a racist. I meant you GREYHOUND people. I'm not a prejudice person - I barely even noticed his skin color. All I saw was that damned uniform.

Second case in point: When Hubby and I were newly married, we dealt a lot with his ex-wife. The woman (and I use that term loosely) was not the most pleasant of human beings, and everything turned into a fight with her, because she wanted to fight about everything. I was young and full of piss and vinegar, so I typically fought right back. One evening, Hubby and I were discussing our youngest. I had some concerns over his behavior, and I wanted him to address them with his ex. He maintained that his ex wouldn't do anything about it. I maintained that it didn't matter if she did or not, what mattered was that he tried. The conversation went on for several minutes, and got heated enough that our oldest, who was sitting at the kitchen table doing his homework, managed to somehow peel his attention away from English in order to keep track of the sparring match playing out in front of him.
And then it happened. Hubby's ex's name is Robin. Hubby looked up at me and said, "All right, Robin."

At least, that's what I heard, right before I told him to fuck off and locked myself in the bathroom. What he'd actually said, and failed to enunciate, was "I'll WRITE Robin."

As the icing on the cake, my mother-in-law showed up unexpectedly a few minutes later, and gave him The Look. You know, that, "what on Earth have you done??" look. In my defense, our oldest heard what I heard. Years later, he said all he was thinking was, "What the hell, dad?! This one's a keeper!!"

What about you? Has your loose tongue ever gotten you into unexpected trouble?