::claps hands and does happy dance:: I'm so pleased to bring you the very first Friendly Friday post, featuring the lovely Sue Brown!

My New Year’s Resolution
Hey Danny, as you are kind enough to let me go on your blog the first week of the New Year, I decided to offload my New Year’s resolutions on you, and do a bit of back-patting at the same time – not easy when you’re built like me.
Six months ago, I set myself a goal. I had to finish my three novels, Final Admission, Stolen Dreams and Morning Report, plus my novella The Layered Mask and short story, Racing Raindrops, and – deep breath – my university essays.
If I finished those, I would give myself a present, an iPhone. Well I finished the last one on December 16th and today I played with the iPhone. Do I need it? No. Did it make it worth working 24/7 for several months? Hell yes. Especially as I got an advance to cushion the blow.
So this year I am going to do the same thing. I have several books planned for the next year which I have blogged about here, because if I don’t make it public I’ll never get them done. What do I deserve for finishing these books? Well, in all honesty, I think I deserve a holiday – a working holiday at least. I’d like to visit my friend, Tom Webb of A Bear on Books’ fame . We’ve promised ourselves a trip to GayRomLit in October. I live in the UK, so it will take a bit of planning, but I’m going to be there. I’ve got friends to meet and I have been promised by Tom and my friend Sharon, that they will feed me.
Sue likes writing. Sue does not like cooking. Can I cook? If I have to, with much sighing and pouting.
I’m going to start work soon, very soon. I suppose it doesn’t help that I have a severe case of writer’s block at the moment. Trying to drag a sentence out is a long and painful task. I have to get a move on though as I have a story due in by the end of January, and another one by the end of February. I must get started, I really must. Maybe, soon, when I’ve stopped playing with my new phone.
Sue’s Bio: Sue Brown is owned by her dog and two children. When she isn't following their orders, she can be found at university listening to lecturers discuss long-dead theologians. In her head, however, she's plotting how to get her cowboys into bed together; she just hopes the lecturer doesn't ask her any questions.

Sue discovered M/M erotica at the time she woke up to find two men kissing on her favorite television series. The series was boring; the kissing was not. She may be late to the party, but she's made up for it since, writing fan fiction until she was brave enough to venture out into the world of original fiction.
Coming Soon: Light of Day published by Dreamspinner Press due to be published 1st February 2012
Light of Day is the sequel to The Night Porter, from Dreamspinner Press. 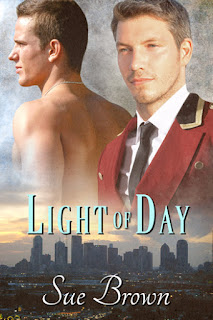