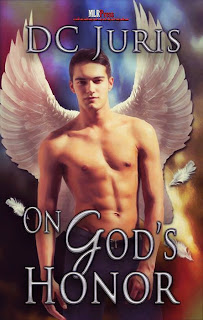 Ekenezer has no idea why Nathan Bradley is so important, or why God has sent him to guard the hapless klutz. But one look at Nathan, and Ekenezer soon finds that he has more than protective feelings for his ward. What’s an angel to do, though, when having the one person he’s ever wanted means giving up his wings for eternity?

Still grieving the loss of his luscious locks, Ekenezer scratched at the back of his neck as he boarded the elevator. No more missions. He'd taken those words as a promise—a vow—when Gabriel had said them last year. And now…
"Hold the elevator!" Nathan Bradley came running toward him, one arm outstretched, the other clutching a pile of papers and folders. "Wait!"
Ekenezer stuck his foot in the door in time to keep it from closing.
"Thanks very much." He made a half attempt at straightening his bundle and gave up with a sigh.
Ekenezer bit his tongue to keep from grinning. "You're Nathan Bradley, aren't you?"
Nathan glanced at him, eyes wide. "I am."
"Barry Scott." Ekenezer held out his hand.
"Barry Scott." Nathan frowned. "Where have I heard your name before?"
"I'm the new vice president of accounting."
Nathan's face turned scarlet. "Of course! Pleased to meet you, Mr. Scott," he said, shaking Ekenezer's hand with enough enthusiasm to send his papers and folders teetering.
"Call me Barry. Mr. Scott's my father." Old joke. Lame joke. Nevertheless, Ekenezer couldn't think of anything else to say. Nathan was beautiful. Those average features that had stared blandly at him from the photo were now alive and animated, glowing with vigor and sexuality. Sexuality? Ekenezer shook himself. Not like him to think such unholy thoughts. Fortunately, he was distracted from them as Nathan's entire pile of folders tumbled to the floor.
"Goddamn it!" Nathan cursed.
Ekenezer winced. He had never been able to get used to the human habit of cursing. "Here, let me help you with those." He bent down to retrieve half of the stack.
"What a way to make an impression on the new boss, eh? Show up running late and dump a pile of crap on his feet."
"I've had worse on my feet, I assure you."
Nathan glanced up at him, no doubt wondering what a vice president could have had on his feet that had been all that bad.
Ekenezer chuckled to himself, remembering what some of those things had been. There had been the time in Brussels when that girl had vomited on him. There had been the time in Nevada when he had trudged through a cow pasture—and more than a little manure—to rescue the farmer's son. There had been the time… He shuddered violently and snatched his hand back from the unexpected glide of Nathan's skin against his own.
"Sorry. Wasn't trying to rip your hand off or anything."
"My fault. I was daydreaming." Ekenezer stood and smoothed his hands over his jacket, tried not to look at Nathan. You're an angel, he admonished himself, a representative of God on Earth! Act like it!
The elevator came to a blessed stop, and the doors slid open not a moment too soon for Ekenezer's frazzled nerves. He shuffled out the door and watched as Nathan went his own way down the opposite hall. Ekenezer's gaze swept up and down Nathan, taking in his small shoulders and falling to linger on his… Ekenezer blushed and turned away, scandalized by his own actions. He had certainly not been looking at a human's rear end, certainly not Nathan Bradley's. A man's!
Certainly not when his wings were the price to be paid.