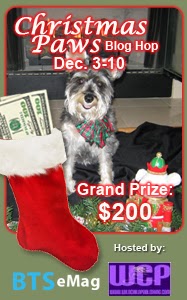 Today I'm sharing some pictures of my baby girl Lollypop.

I work at a veterinary clinic, and one day, Lollypop came in. Her owners had been sent to prison, and she'd been abandoned with three tiny babies. The neighbors finally took action and brought her in after one of the babies died. She was emaciated, matted, and infested with fleas and roundworms. One of her two remaining babies did not survive. The other went to live with one of our doctors, and is almost as beautiful as her mom. We initially put Lollypop up for adoption at our clinic, but no one seemed to want her. One woman even said she was "too ugly to own!" Needless to say, by that point I was already in love with her, so she came home to live with us.

These days she is pleasantly plump, sassy, and full of mischief! 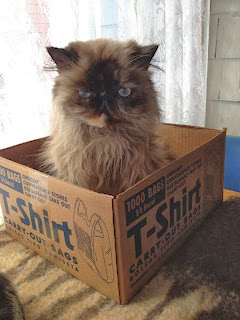 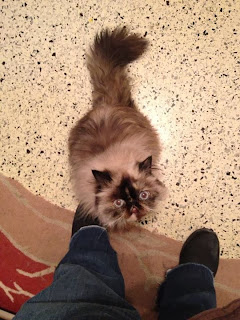 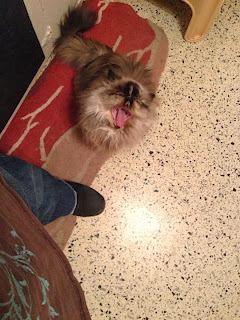 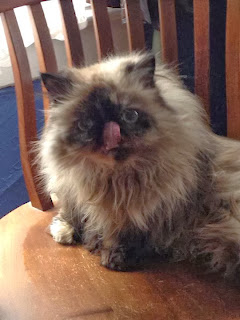 For my prize in the hop today, I'm offering up a free pdf copy of my m/m/m "Perfect Christmas" to one lucky winner! To enter, just leave a comment below, telling  me about your favorite furry friend. If you don't "own" one, tell me about someone else's! 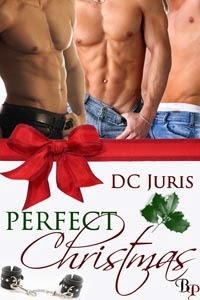 
Evan waited in line at Pierce's, the only store open on Christmas Day in the sleepy, coastal town of Ormond Bay, absorbing the chaos as people hurried up and down aisles in search of forgotten holiday necessities. Across the store, a lady frantically called for help from a clerk, begging him to tell her they hadn't sold the last of the cranberries, and wailing about how she couldn't make the perfect meal without them. In front of Evan, a man dressed in a suit and tie tossed down a fifty, told the cashier to keep the change, and ran out the door with two frozen pies.

Evan emptied the contents of his basket—a motley assortment of store-brand frozen dinners, cookies, soups, and canned fruit—and frowned, feeling rather frumpy in the mix of brightly dressed people and festive, almost garish, decorations of the store. He ran a hand absent-mindedly through his hair, remembering only just then he'd neglected to gel and spike it this morning. Not to mention that he also hadn't bothered to get the red tips recolored. Above his dark roots, the tips looked more gray than anything else. Fabulous. It didn’t help that he was probably the only person walking around without a tan.

He dug into the pocket of his sweatpants and pulled forth his wallet, handed over a crisp twenty-dollar bill with a sigh. Even his money was snazzier than him.

"Merry Christmas, Mister Connor!" The bubbly cashier beamed up at him from under her picture perfect, curly blonde bangs, but Evan just scowled as he grabbed up his bag of groceries and walked away to trudge out the door and back down the street for home. Outside, even the bright Florida sun couldn't dispel his dreary mood.

Christmas, huh? Bah! Humbug! What did he have to be cheerful about, anyhow? Watching reruns of stupid movies over his microwaved TV dinner of Salisbury steak again? Dodging phone calls from his mother and other assorted supposedly well-meaning relatives whose main questions seemed to be where was his lover, Drake, and when was Evan going to stop putting up with that man's schedule and find someone who appreciated him? Spending yet another Christmas alone, while Drake jetted around the state with the annoying millionaire boss?

Evan sighed. Trouble was, Drake did appreciate him; Drake only worked so hard so that he didn't have to, so he could pursue his artwork. And he knew Drake felt just as bad as he did about missing out on holidays, but Drake's boss had made it quite clear in the initial interview that she expected her men, as she called them, to be at her beck and call, regardless of the time of day or night. Or year. But the money? The money was very, very good. And they were young now, only in their twenties. They had the rest of their lives to spend holidays together, didn't they?

Thanks to our hop sponsors: