In Defense of Sluts, Bitches, and Assholes

It's been a while since the whole Miley Incident, but for those of you who were living under rocks and somehow missed it, this about sums it up:


Yeah. And that's just a little of it. Oddly, the only thing I found even remotely disturbing were all the bears... 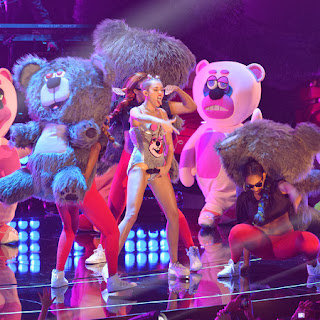 In any event, the resulting fallout was pretty nasty. People called her a slut, a whore, said she had mommy and daddy issues, that she was on a destructive path, blah, blah, blah, etc., etc.

Shortly after that, this happened:

"Sinead O’Connor pens open letter to Miley Cyrus"
Of course, it didn't stop there, because Miley, classy girl that she is, fired back, making fun of Sinead's 2012 Twitter meltdown, and the whole thing just got nastier and nastier from there.
Now, the public was rather split on this. A lot of people though Sinead was just trying to look out for Miley - help her become less of a whore/slut/person with mommy/daddy issues/get off her destructive path/blah, blah, blah.
On the other hand, a lot of people thought Sinead was just being a bitch, and clearly had only publicly contacted Miley for the publicity of it. Hmm.
But I digress.
Everybody knows I'm a huge Star Trek nerd. I have this fantasy where I'm at a comic convention, and one of the cast - any of them, really, though my heart lies with TOS, comes up to me and says "Are you DC Juris?" and when I nod and say yes, they blush about how much they like my books and we become fast friends, and I get to meet oodles and oodles of Trek people, and I end up giving movie input.
Hey - I never said I was sane.
So the other day, someone sends me this: William Fucking Shatner, and this: George Takei Thinks Shatner is a Ass.

These are not, of course, the first times I've heard "Shatner is an ass." I've heard it more times than I can count, and I've heard it about numerous other cast members, from TOS to DS9. For some reason, when you like a show or movie, people feel compelled to point out these things.

Here's my two cents on everything I've listed above.

Is Miley Cyrus a slutty whore with mommy/daddy issues, on a path of self destruction?  I have no fucking clue because I'VE NEVER MET HER. I have never interacted with her, sat and talked with her, hung out with her, been her BFF (which may or may not stand for one or more thing...), never had coffee with her, etc. I don't know a damned thing about her, other than she sings songs I don't like, was in a show I didn't give a rats ass about, and wiggled her ass on TV. What does that all amount to? Not a whole helluva lot. And I'd wager to guess that those people throwing nasty words at her don't know her either. For all we know, the whole thing - everything surrounding it both before and after - was a huge publicity stunt. The fact is? WE DON'T KNOW. And who are we to sit in judgement? Maybe she *is* spiraling out of control. Maybe she *is* a slut. But unless you're privy to the intimate details of her life - including her sex life - you don't know, and you don't have any right opening your mouth.

Did Sinead send those letters out of concern, or just to get her name back in the spotlight? WHO KNOWS. Either one is possible. I mean, come one, when's the last time you thought about Sinead O'Connor? I vaguely remember something about her ripping up the Pope's picture and shaving her head, but that was like, 50 years ago. (It should be noted, I have no concept of the passage of time. TOS was yesterday, right?) Is she truly a compassionate, caring individual, or just a limelight seeking bitch? ::ahem:: See above re: Miley Cyrus. Change slut to bitch as needed.

And as for William Shatner. Unlike apparently 99% of the population, I'm perfectly capable of separating actors from roles. It's what makes me able to still watch "Braveheart" and not want to throw something at the TV because Mel Gibson is a wacko. Yes, I've thanked Shatner for being Kirk before but um...yeah? Shatner played Kirk. Who else was I going to thank? And for those who meet him once and think he's an asshole? Really? You met him once for, what, five minutes, and you managed to form a perfectly rounded, complete opinion of him in those moments? That's impressive. You're telling me that in the five minutes of meeting him, you knew how he'd slept the night before, how his love life was going, how his breakfast had been, if he'd been ill, if anyone he cared for had been ill, if he'd been bitched at, if the airline had lost his luggage... you knew *all* that information? Because if you *didn't*, then you had no basis for understanding his mood and reactions in the five whole Earth-shattering minutes during which you probably stood there like a slack-jawed yokel barely able to keep your drool from dripping onto his shoes. Unless of course you *did* droll on his shoes, in which case, no wonder he was an asshole to you.

There have been times, I'm sure, when people have met me at conventions and though I was an asshole. I distinctly remember the last day of my first convention - GayRomLit in New Orleans a couple years ago. I was standing at the curb of my hotel, ready to get into a shuttle and go to the airport. Someone came running up to me, gushing about loving my work, etc. I know I was an asshole to this person. I *know* I was. I was in a hurry, the shuttle was running late, I was exhausted, worried about making my flight, running over my luggage in my head wondering if I'd left anything behind, trying to figure out the math of if my flight was late to airport 1, how long would I have before I needed to leave to make it to airport 2... etc.

I'm sure that person thinks, to this day, that I'm an asshole. I'm not, really.

Here's the thing everyone should understand about everybody else:

IT'S NONE OF YOUR BUSINESS.

So what if Sinead is a bitch? She has that right, too. She can send all the open letters she wants to anyone in the world, and there's not a damn thing you can do about it. Maybe she'll send you one.

And if Shatner's an asshole to you? Um...hello? He is WILLIAM FUCKING SHATNER. He's a television ICON. He's also a musician, singer, author, film director, spokesman and comedian. He breeds and shows horses, which helps benefit the Central Kentucky Riding for Hope "Horses For Heroes" program. Since 1990, he has been a leading force behind the Hollywood Charity Horse Show, which raises money for children's charities. And in 2001 he purchased a house to serve as a “sober living” facility in remembrance of his late wife, Nerine. In the early 1970s, he was homeless, living out of the back of his truck. Bet you didn't know any of that, did you? But yeah, please make sure you ask him about shit he did almost 50 years ago, because really, he hasn't done anything relevant since Kirk, right? Maybe he's sick of only being recognized for one thing. Or maybe not. Maybe he's just a great big, flaming asshole.

WHO CARES?
The next time you want to open your mouth and call someone a slut, bitch, or asshole, think about it for a moment. Think about what you're really saying. You're making a judgement call based on one single bit of interaction. Would  you want someone to do that to you?
Because, frankly, if you've been sitting here reading through all this, you're probably a pathetic loser with no life who spends far too much time on the Internet being involved in everybody else's shit while refusing to look in the mirror and face your own.
No? Well, I stand corrected then.
Yes? Well, you know what - that's just...that's just fine.

See what I did there?