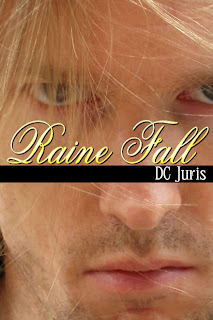 Vance, Andrew, and Raine are back! We met this sexy trio in "Where He Belongs," but now we get to find out how it all started. Raine's world is turned upside down when his sister, Lilly, dies unexpectedly. She's left him the Dew Drop Inn, and everything seems very cut and dry - he'll sell the place and return to his calm, uncomplicated life. But his former lover, Vance, and Vance's saucy sub, Andrew, have other ideas, and when Vance makes a counter offer, Raine is left wondering what the right thing to do really is. Is everything he's worked for worth it without love? Can two powerful Doms even coexist under the same roof?

A moving truck blocked his spot in the driveway when he arrived back at Vance's house. For a few minutes, Raine didn't move from the car. That truck contained his sister's personal effects. Christ, Benson moved fast. No wonder Lilly had chosen him. Raine folded his arms across his chest and watched as the movers unloaded seven boxes and took them one by one into the house. Seven boxes. Could thirty-two years of life really fit in seven boxes? It seemed far too few. But then Lilly had never been the sentimental type. There'd be no trinkets in those boxes. No saved greeting cards or letters from former lovers.

Andrew stood in the doorway after the movers left, watching Raine. He tilted his head to the side, looking like he was trying to solve a puzzle.

Raine got out of the car at last and went inside. He sat down on the couch in the living room, where the boxes had been stacked.

"Not many boxes." Vance leaned in the doorway.

Raine shrugged. "That's Lilly for you." He kicked at one of the boxes. "One of these is probably full of important papers. The rest..." he trailed off. What would be in the rest?

Vance entered the room and flopped down on the couch next to him. "Should we take a look?"

The first three boxes were exactly what he'd expected -- tax records for the bed and breakfast, copies of maintenance agreements, manuals, and warranty paperwork.

"We should probably separate some of this out for the new owners," Vance suggested.

"Yeah." He started putting papers into two piles, one for the inn, one to be filed away.

"May I help, Masters?" Andrew waited by the door, hands folded in front of him, head bowed.

Vance glanced at Raine and shrugged.

"Yes, thank you." Raine kicked at one of the boxes. "You can start with that one. Just tell me what's in there and I'll tell you what pile it goes into."

Andrew hurried over and knelt by the box, humming softly to himself as he opened it and started digging inside.

Raine couldn't suppress a grin. Andrew had definitely been born to be a sub. He envied what Vance had with Andrew. He'd never met anyone he'd wanted to share his life with, let alone live the lifestyle with twenty-four seven. Well, not other than Vance and Andrew, anyhow. But the last thing Andrew needed was two Doms in his life.

"Where would you like cards and letters, Master Raine?"

Raine snapped back to attention. "What?"

"Cards and letters?" Andrew held up a stack of papers.

"Cards and letters?" Raine echoed the words in disbelief. What the hell?

"Let me see those." Vance took the pile from Andrew. He shook his head. "Son of a bitch." He handed the bundle to Raine. "These are all from you. From after you moved."

Raine took the papers with shaking hands and leafed through them. Birthday cards. Christmas cards. Letters. Postcards from business trips. She'd kept everything he'd ever sent her.

"Ribbons?" Andrew held up a bunch of different colored ribbons that had been braided together.

Raine raised an eyebrow. "I have no idea what those are."

"They're off flowers." Vance pointed to Andrew's hand. "That one -- the long blue one with the tulips on it? That's from Sully's Florist Shop down the street."

Raine's stomach did flip-flops. Not flowers from old boyfriends, but from him. When he looked closer, he recognized each ribbon from a delivery of flowers he'd sent her over the years.

"I never would've pegged her to be the kind to keep stuff like this," Vance murmured.

Raine shook his head. "She wasn't." She'd told him once that he was the exception to the rule when it came to most things. Maybe that explained the boxes full of mementos. He handed the bundle back to Andrew. "Just keep those in that box. I'll go through them later." Or never. Probably never.

Andrew put the papers back and secured the lid. He opened the next box and frowned.

"More cards and letters, Master, but not from Master Raine." He held an envelope up and squinted at it. "Amelia--"

"Jesus Christ." Raine leaned over and snatched the envelope away.

"Your mom?" Vance raised an eyebrow.

"It would appear Lilly had a few secrets." Raine glanced at the date on the postmark. Two years ago. "How many of these are there?"

Andrew rifled through the box quickly. "The entire box, Master."

Lilly had been in contact with their mother for years and hadn't said anything to him. He felt the pain of that like a knife in his side. Though he wouldn't have agreed, he wouldn't have held their relationship against her. He hated that she'd felt she couldn't tell him.

"Did they reconcile?" Vance asked.

Raine shrugged. "So it would seem. I don't know how, or why, frankly, but..." He trailed off. But apparently his sister had been a bigger man, proverbially, than him.

Andrew let out an anguished sound. "Your father's obituary, Master."

Raine took the scrap of newspaper and read it over. Donald St. James. Loving father. Devoted husband. Never missed a day of work in his life. Survived by his son, Raine, daughter, Lilly, and beloved wife, Amelia. Raine closed his eyes, remembering the day the call had come in. Amelia -- he still couldn't think of her as his mother -- had kept him home from school because he'd had a fever. When the phone rang around lunchtime she'd yelled for him to answer. He'd stayed on the line after she'd picked up the other one, heard firsthand the words that would change his life forever. There'd been an accident. His father had fallen into one of the vats at the plant, struck his head and drowned before anyone could get to him.

Raine remembered going to the funeral, all the local men patting him on the shoulder, telling him he was the man of the house now, telling him he had to look after his mother and sister. And he remembered, too, the day he woke up to find out he and Lilly were on their own, a note, scrawled hastily in black magic marker, stuck under a magnet on the fridge. I can't do this anymore. I need some time. Your Aunt Martha will come stay with you. I need some space. I love you both. Mom.

Raine chuckled bitterly. Aunt Martha, the alcoholic, had spent most of her time face down on the couch. At thirteen years old, Raine had learned to sew, cook, clean, and take care of his six-year-old sister. Over the years, his skill set had widened. Not only could he make an informed decision about tampons by the age of seventeen, he could French braid hair, apply toenail and fingernail polish without one slip, and coordinate eye makeup with jewelry and handbags. God, no wonder he was gay. He opened his eyes to find both Andrew and Vance staring at him, wide eyed.

"Are you all right, Master Raine?"

He smiled softly at Andrew. "I'm fine. Just reminiscing." He pointed at the remaining two boxes. "Let's get on with this. They're not sorting themselves." He pushed the pain away. He pushed the guilt away. Get back to the task at hand.