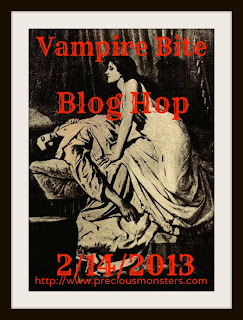 Vampires. From the friendly Muppet Count von Count, to Anne Rice's Lestat, right up to Being Human's Aidan, let's face it - vampires are everywhere. And of course there's a whole slew of them in m/m fiction.

I've got a couple of my own, actually. There's Malagan and Orion from "Orion's Way." Orion struggles with who and what he is. Malagan, on the other hand, is the ancient, confident, bad ass vampire.

Why, though? What it is about these creatures that makes us so gaga over them? Of course they're sexy - you've never seen a truly unattractive vampire, now have you? And there's that whole homoerotic thing going on, if you're into that, as some of us are. ::wags eyebrows::

But I think it's  more about the essence of the vampire than the actual vampire. They represent the opposite of everything most people fear - getting sick, growing old, dying. And more importantly - running out of time. Everyone I know is trying to do a million things at once, like going back to school, raising children, renovating a house. Running themselves ragged. Vampires have the luxury of taking their time, doing one thing at time. How nice would it be to spend time just doing one thing, because you know - hey, I can always tackle that other thing in the next several hundred years.

Yeah. Think about that, hmm?

Anyhow, here's an excerpt from "Orion's Way." That's also your prize for today - one lucky winner will receive a pdf copy. To enter, just leave a comment below with your e-mail. Easy, peasy. Enjoy! 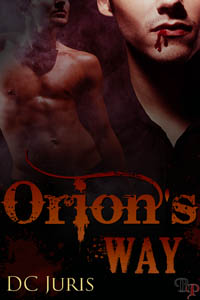 This was a bad, bad idea. Orion shook his head at his own stupidity even as he backed away from Clay. Far older than Clay and twice Clay’s size in build, he could easily break the other vampire, but he didn’t have that in him anymore, and he had been stupid to think he did. He edged to his left, closer to the door.

“Answer me! Did Malagan send you?” Clay stalked toward Orion, hands balled into fists at his sides.

“This has nothing to do with Malagan,” Orion told him. “All I want is to see Xavier.” He held up his hands in surrender. “I’ve got some medical training, you know that. I just want to check on him, make sure he’s okay. I know you’re not going take him to the hospital.”

Freak. The word went straight to Orion’s guts and sent a shiver of hatred running up his spine. He pushed his shoulders back and stood taller, towering over Clay, but to no effect. Clay didn’t back down, didn’t turn away, didn’t show one single sign of submitting.

Clay laughed and snapped his fingers in Orion’s face. “Look at you. Size of a fucking giant, but the balls of a three-year-old. You’ve got no spine, Orion. You’re nothing but a simpering weakling who hides behind Malagan.” He turned away and moved to the bar.

“Don’t turn your back on me,” Orion warned, tempting fate.

“Why not?” Clay called over his shoulder. “What are you going to do about it? You going to beat me senseless and take what you want? That’s what you’re good at, isn’t it? Why don’t you come over here and try it, freak? That’s right, come on over here. I won’t even turn around. I’ll let you have the first hit. That’s all you need. Just that first hit to get you going. And then you’ll bloody me up, right?”

“I’ll do what I must to get Xavier away from you.” Orion took a deep breath and stood his ground, unmoving. He wasn’t about to back away, but he wouldn’t do anything rash either.

Clay rounded on Orion and smirked. “You don’t have the guts.”

The door opened behind them, and Orion turned to see Malagan standing in the opening. Elation and anger warred within him. He wanted to smile and gloat to Clay that now things would go his way, but another part of him hated Malagan for showing up, for stealing his thunder. For proving Clay right.

“He may not,” Malagan murmured. “But I do.” He swiveled his head to look at Orion, sent a knowing, compassionate look Orion’s way. “Xavier and I will meet you back at the lair.”

Heart pounding, Orion swallowed his pride and nodded. He left Clay’s house, the sounds of breaking glass and Clay’s yelling echoing down the path. He stopped at his car and turned back toward the house. This wasn’t Malagan’s fight—Malagan hadn’t started it, after all, and Malagan shouldn’t be the one finishing it. Orion took three steps up the path and froze as his guts knotted up and a wave of nausea assaulted him. Gagging, he pressed the back of his hand to his mouth and stumbled back, colliding with the front of the car.

Frustration tore at him. Self-loathing and worthlessness wrapped their claws around him and pulled him under. Orion whirled and brought both fists crashing down onto the hood of his car. Again and again, until he’d left a bloody dent. Exhausted, lightheaded, he straightened and choked on a throat full of tears as he ran his fingers over the ruined hood. Why did he break everything he touched?