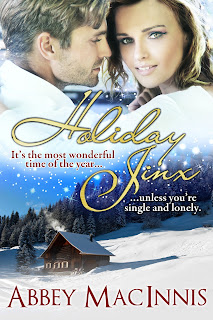 Jinx--one of Santa's elves--is in trouble with the Big Guy. She's been charged with bringing holiday happiness to Christopher Ragan, CEO of Wondrous Toys. It's a big job especially when he's more attached to the bottom of a bottle than helping his fellow man.

She's got enough trouble without spilling the secrets of the North Pole, but then along comes Natalie Burnes, a newbie CEO of Enchanted Toys and in trouble of a hostile takeover from Christopher's company. The woman literally crashes Christopher's vacation plans in a tucked away Michigan cabin---and the sparks start flying.

As if Jinx's job of matchmaking the toy makers isn't hard enough, she's got to stay one step ahead of the North Pole patrol and keep out of sight of the humans. No way is she gonna screw up and lose her magic again. If the humans can't find happiness and love by Christmas, Jinx forfeits her chance of seeing her true love too. What's an elf to do?

EXCERPT:
This excerpt is from the beginning of Chapter Two.

Run. Get out of here. Adrenaline pumped through Natalie’s system, but fear kept her riveted in place. Light from the bedroom spilled into the hallway and gleamed off broad, bronze shoulders and muscular thighs. The man stood about six foot three. From her vantage point, she noted his tight glutes and ripped biceps, an obvious indication he didn’t neglect his physical health.

Natalie scrambled to find the courage to drag her gaze from his naked torso, up his wide chest, and farther still to his face that appeared like textured marble in the artificial light. She deduced he meant her no harm when he stumbled back against the bathroom doorway, his hands covering his ears.

If he were some crazy person, he’d already be after me. What kind of robber would go around in the middle of a blizzard naked anyway?

Her fright dissipated as she glimpsed his taut jaw set at a stubborn angle. He remained still with his shoulders back and legs spread. He crossed his arms and stared her down, his expression pinched.

A hot, annoyed, naked guy was the last thing she expected to encounter in her cabin. She didn’t know who was more caught off guard. “What the hell are you doing here?” she demanded, taking another step back.

A faint niggling of recognition stirred her brain cells. I can’t be right. Fate can’t so readily be handing me who I’m wanting to see, and in such a nicely presented package.

He pushed his wavy blond hair from his furrowed brow and regarded her from deep, intense blue eyes. “God, am I still dreaming? I thought I was rid of you.”

Dazed, she shook her head. This time, she was wrong. Fate had decided to help her out. This naked hottie was indeed Christopher Reagan. And what was he talking about? He was the intruder. “Um… No, I just got here.” That sounded like an apology. She hardened her voice. “Why are you in my cabin?”

“He’s been waiting for you,” whispered that same voice she’d heard on the porch. This pulled Natalie’s attention from the naked guy. He wasn’t the one who had spoken. To be sure there wasn’t anyone else in the room, she scanned every corner. To her consternation, she found nothing.

I must be going crazy. Or the resident ghost in this place is more active than I’d like.

“Did you just hear something? A voice maybe?” she asked.

He hesitated for a moment, blinking as he gaped at her. “Hear what? You screamed loud enough to burst an eardrum. That’s all I heard.”

Maybe I’m more tired than I think. Hearing voices. Seeing naked men. Is this naked man real? At least he looked real, standing there in the flesh. The very sexy flesh. She struggled not to openly ogle him. He showed no such restraint as he perused her from her tangled, damp hair to her frozen toes, warming her blood.

She turned away from that burning stare. Her heart rate slowed, but her anger rose as she saw the bottles and glasses on the floor and recognized that Reagan, the intruder, had apparently been making full use of her cabin.

She flattened her lips into a hard snarl. “Who do you think you are? This is my cabin. With this mess,” she swept her arms wide, gesturing to the bottles, “you act like you own the place.”

He tilted his head in that arrogant way that sent familiarity slamming through her. She’d seen that look before and hated it now as she had then. “I do own this place. Rather, my family does. I’m Christopher Reagan, and this is my uncle’s cabin.”

She had yet to observe a look of acknowledgement in his eyes, though she’d rather pretend she hadn’t recognized Reagan at all. She’d traveled all this way to see him, but not unclothed and in her cabin. There was only so much of the man she could handle.

This excerpt is from the beginning of Chapter Five.

Natalie shook her head. “I’m not up for any tournaments tonight. The trip here fried my brain and discombobulated my nerves. I’ll never be the same again.”

“Oh, come on. How about a quick game? Every goddess has to learn to be a good loser.”

“Goddesses need sleep. I’ll need to be completely rested before I accept any challenges. And then you’re the one who’ll need the extra rest since I’ll cream you in your particular game of choice.”

Chris couldn’t help but taunt, “You’re too tired to play a short game of Scrabble, princess? Just one little game?”

She moved closer and stared him down. He knew Natalie hated being confronted, but he loved goading her. “It’s just a stupid board game. Are you that bored?”

“Yes. This evening has been particularly unamusing,” he replied drolly. Sparring with her was more fun than vegging out in front of his plasma TV. If he were being honest, he was glad to have company, even if she wasn’t his first choice. “But I understand,” he complied. “Princesses are easily worn out. They pass their days primping and spending all their money.” He looked down at her un-chipped nails painted with the colors of the holidays. “They waste so much energy doing silly tasks, like their nails.”

“My nails aren’t so nice. See?” She raked them down his arm. She wasn’t playful about it, exerting enough pressure to leave red marks on his skin.

“Do you always result to assault to get your point across, princess?” He seized her hand in his, containing her fingers.

Her hand squirmed, the fragile bones under the soft skin flexing in his hold. He held fast. “I find physical contact works best when talking becomes a moot, wasteful pastime,” she said, her eyes flashing bright. “Especially when one’s opponent’s skull won’t crack with one hit to the head. Sometimes they need several hard thunks to dent their stubborn skulls.”

Good, she thinks me an obstinate, selfish bastard. Just what I want. “Ah, so you love scratching me up, princess?”

“Could be. You’re lucky they’re not as deadly as they were a few days ago. If I were truly spoiled, I wouldn’t want to get my hands dirty. I spend as many hours at the office as you.” She tugged her hands from his and tapped her index finger against his manicured nails. “Maybe even more. Could be you’re the spoiled little prince. Look at those buffed nails and perfect cuticles,” she mocked. “My my, your royal high ass, how masculine they are.”

It was his turn to yank his hand away. She made him sound like a sissy with a superiority complex. “I don’t need to get my hands dirty. I’ve been through that stage. My company can run itself,” he shot back. “Can’t be easy being you when you can’t enjoy the fruits of all your hard labor.”

“Getting your hands dirty keeps you on your toes. I spend long hours coming up with new solutions for my company. Guess you love your golf game more, huh?”

“What…the little prince doesn’t want to play a game now?” she reproached. “We just did. Cat scratch fever, and I won.” She waggled her fingers over his arm. “How’s it feel to lose, your royal high ass?”

“Thought you needed sleep. You’ve been fooling me all evening. You look like you just came off a runway.”

Chris was an expert at melting the panties off willing women. But as much as he wanted Natalie, he knew he wouldn’t get closer with the normal, boring, insincere pickup lines. That line wasn’t the usual for him. He’d actually meant it. Despite the bags of exhaustion under her eyes and the stress tensing her shoulders, she was beautiful. Not in the made-up, fake, enhanced way women he was used to associating with were. Her beauty was more natural and earthy.

Natalie’s combined snort and burst of laughter sent warmth sprinting through him. It wasn’t a fake I’m-laughing-to-appease-you kind of chuckle, but an honest-to-God from-the-gut hoot. “Oh, Reagan, you’re outdoing yourself. I look like hell and I know it.”

“No, really. From where I’m sitting, hell looks pretty great.”

Her kick from under the blanket couldn’t hurt a flea, but he pushed back all the same. Their feet became entangled under the quilt, her body heat seeping under his skin. “Stop it, Reagan. You’re flattery’s killing me.”

“Let’s do away with the formalities once and for all, Natalie. You saw me naked as the day I was born. That takes us to first names automatically in my book.”

He liked how his name rolled off her tongue like a sip of fine port.

The combined temperature from the fire and their bodies settled him and did away with the rest of his hangover. There was a part of him that didn’t want her to leave him since he’d be alone again. Her sweetness temporarily did away with his despair, and for a moment, Chris basked in the feeling of contentment. “I should turn in too,” he agreed, distracted as his gaze fixated on her mouth, yet he didn’t move to rise from the love seat.

Don’t go all soft where she’s concerned, Reagan. So what, you want to kiss her. It would be just one little, harmless kiss. Just like sex is sex. Stop reading more in to it.

On most days, Abbey can be found at her computer, penning her latest tale. A tale where love, respect, and passion combine to create a satisfying and happy ending. Guaranteed. She invites you to step in to the pages of her romances, to leave your worries behind and get swept up in her world.