Tell us a bit about you, and something we don't know/wouldn't expect about you.

My name is Abby-Rae Rose. I’m an independent student working on my PhD in English. I write Paranormal Romance, and Western suspense. As we speak I’m also working on a YA Romance series. I’m very hard-working and Open-minded. I have been writing for 3 years now. Writing is not only a dream, but it has become my life. I’m 24 years old. I love to eat Oreos with peanut butter. I can’t cook at all (Laughing out loud). I’m also the biggest geek on this earth. I love historical movies based in 1800s. I’m a simple romantic, flowers make me happy.

What’s your favorite moment of the day, and why?

Why become a writer?

When you sleep at night, do you dream? Do you wake up with a great story to tell? When you're outside, do you dream of another place? Do you look for an adventure? Do you believe that the imagination can drive you to do great things?

I write because of all of those things. My creative heart continues to run full with ideas. Many people have their sports and other activities that everyone can associate. Everyone can be a writer, but it takes a true sprit to contain the gift of storytelling. I believe that I've been blessed with that gift. It's easy for me to express my feeling through words.

I want to share with the world my stories. As a child I remember reading, sitting, listing to my grandma, my mind would run wild, free its self. That is what I want to give to the next generation of children, adults as well. I want people to recognize me as that writer that made them feel, love, use their imagination. I don't have to make millions or have a big name like J.K Rowling, Rachel Vincent, Stephenie Myers, Keri Author etc.

It was late December of 2009. My husband died January 10, 2009. I was depressed and my sanity was falling to crap. Well, I started to work for this company called Nicholas tree farm. I worked every day 24/7. My boss walked to me one day with a gift. She told me her daughter had given her these books, but she didn't find them appealing. I took the hardback into my hand. It was Twilight by Stephenie Meyers.

I read all four of those books in one week. It made me feel again. I was able to pick this book up and slip into another world. Somewhere, not dangerous, not hurting myself. I was free again, like when I was a child. It reminded me of happiness. With everything around me changing, reading was the only thing that remained the same.

After reading her novels, I went forward buying different books. Paranormal Romance was the main genre. I now have two hundred and thirty books. Reading was great, but one day I decided to write my story. To relive the pain that was in my heart unto paper. I noticed that I was telling a story. That my dreams were of places, people I wanted around me. It made me ecstatic that I found something to love in my time of hardship.

How do you get into your characters' heads and shoes?
I don’t - they get into my head and stomp around until I listen to them, LOL.

Actually, me and my CP work together to really understand each hero and heroine I write about. I do a character interview, and work out the kinks as I go.

What unique factor do you think you bring to the book/story market?

I will have you fall in love all over again, make you believe that life is not just hard work, but it’s fun and unexpected things can happen.

Best advice you've received, and that you'd want others to know?

Don't give up. There are too many nay-sayers out there who will try to discourage you. Don't listen to them. The only one who can make you give up is yourself

Here is a little snip… Enjoy

“So you will be our liaison while we’re here?” He held his ground, using his superior height to hem her in even as he caressed her inner elbow. The slight gasp was a good sign. When her eyelids lowered, his body reacted immediately, screaming to dominate.

He held back as he waited for her response.

Finally, she took a deep breath and raised her eyes. “If that will work for you?” Shocked at the greenness of her eyes, he was mesmerized as her pupils slowly dilated and expanded until the slight hazel brown eclipsed and changed her eyes into dark orbs, the flecks of green barely visible. Good God, even her eyes spoke to him, begging him to take her.

As quickly as the moment engulfed him it was over in a blink. Elle glanced at Darren, her posture screaming at him her submission and he nearly shouted with joy. She even lowered her head at Darren‘s direct gaze. “I’m sorry you were kept so long. I’ll see what I can do to get you whatever you need. Some water and coffee perhaps, everything else should be here for you.”

Without another word, she slipped from his grasp and left the room.

Seconds ticked by, the two of them staring at the door.

Darren was the first to break the silence. “Did you see that? She plays it perfect.”

“Tell me again why we can’t have her?” Maxwell sighed turning back into the room. “Oh yeah, this is business and my brother would kill me if I pilfered the women from the company for my own entertainment.”

Darren plopped down into one of the swivel chairs, his mood lighter than it had been since he‘d met him in reception. “Yeah, that wasn’t part of the arrangement.”

Maxwell couldn‘t let it go though “Of course, what he doesn’t know…”

“… Is all the more fun for us?” Darren grinned evilly, his pen already twirling in his hand.
***

Broom closets weren’t necessarily the best way to talk to your boss but Fred had dragged her in.

Nearing fifty, the man was often distracted and obtuse. Today, his hands fidgeted so much she’d think he had tremors. But no, something else was going on. She didn‘t want to think too much about the magnetic men she‘d just showed into the biggest conference room. “They want to go over your payables and receivables for the last year.”

Elle took a closer look at Fred. He was sweating profusely and looked constipated. “Are you all right? Are you sure I can’t get you something to drink or maybe a doctor?”

Fred waived her off and stared off into the distance, “He’s spying on me.”

“Wouldn’t a spy have to work for you, already?”

Fred wasn’t listening, just mumbling to himself. Elle held her tongue. Those powerful men had thrown her for a loop; hard sensuality oozed from every poor and already had her nervous. Having Fred here, nagging her in a janitor’s closet. While fending off a grungy mop that was ready to fall down on her, wasn’t helping her nerves which were already on edge.

The two men stood nearly the same height, but the dark haired one Maxwell devoured her with his cold grey eyes. She’d nearly stumbled in her red heels trying to keep her legs moving even as she’d felt that powerful gaze on her every step of the way down the long corridors.

The other man, the copper blond Darren, his voice was sexy and dark with that British accent. He was the talkative one. Maxwell just stood there in his beautifully tailored slacks and blue striped shirt and tie, just staring at her. He’s the one that made her jittery, her fingers and toes curling just by the feel of him behind her.

Fred was saying something she didn’t catch, pulling her back from her reverie. “I’m sorry. What did you say?”

“You have to distract them.”

“How, Fred? I’m just an analyst. I’m not a sales person or even an accountant. I’m not sure what they would need me for.”

Fred waived her off. “You’re a woman. You have,” he looked her up and down, a leer curving his lips and making her cringe, “certain attributes that surely they find attractive.”

The slow unfurling of her temper simmered in her stomach. She didn’t like where this was going. Sure, Fred had always leaned toward the slimy but he’d always kept that leer pointed in other directions -- not at her. But just that look made her feel second rate, used. And no one used her. Not her friends. Not her coworkers and certainly not her boss.

Too bad she was too much a southern lady to punch him out.

He wasn‘t done though. “With your promotion on the line, I’m sure you want to step up. Show the company what you’re made of.”

Elle almost slapped him like she would a hard-headed colt, good and hard. Enough to leave a bruise. Instead, she took a deep breath and shoved the crummy mop into his face. “Fred, I’m going to pretend I didn’t just hear that. I don’t negotiate with scumbags.”

Stepping out of the closet, she twisted the lock and slammed the door shut.

Outside in the drab hallway, she breathed deeply and tried to calm her racing heart. The nerve of the man. She wanted to scream.

“Something wrong,” a deep voice said behind her.

Elle spun around and was caught in those gray eyes -- Maxwell.
***

Your book: Sassy, Classy and Everything Seductive.

You as an author: Young, Sweet, and Darn Delightful

Tell us about your latest release 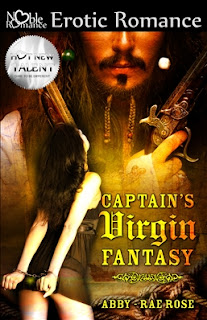 He’s changed everything…but she can’t change the fact that she loves him.

Victoria refuses to let Ishmael intimidate her— She‘s faced with a choice. Return to her life of duty, or embrace her spirit of adventure…and sail the high seas with the man who has captured her heart.

Captain Ishmael’s demands are simple… In exchange for his pleasure, and her body to quell his voracious lust, he will guarantee safe passage.

But, Ishmael’s plan doesn’t include giving up his lover so easily. And, once he gets a taste of Tori’s sweet blend of innocence and boldness, he can’t imagine living without her.

Where can we find you and your books?

Where can we find you on the web?

Abby-Rae Rose
Posted by Marci Nichelle Jansen at 8:00 AM