Hey there, everyone! I’m so excited to be able to pop by for Dan’s Friendly Friday. Thanks so much for having me today!

When I first started thinking about what to write for this post, I couldn’t come up with anything. When I was first offered a chance to promo on Dan’s blog, I wasn’t well aquatinted with his work. I’ve been writing and reading M/M romance for a couple of years now, and for some reason I just never bought anything by DC Juris. So as soon as I accepted the spot, I immediately went on a web search and purchased a few books to rectify that error.

All I can say is… where have these books been all my life? LOL.

Yes, I am now a DC Juris addict and I wouldn’t have it any other way. I know I’m supposed to be using this post to talk about myself and my latest book, and I promise, I’ll get to that. But I just want to say how happy I am that an author like Dan is out there as a rising star, entertaining us with his words and stories.

Now, onto the regular promo stuff.

My latest book is titled The Beast’s Promise and it was published by Silver Publishing. It’s book 2 of my Outside the City series. It was a labor of love to write, and so far the response has been wonderful. My readers have been so excited to read the next chapter in these characters lives, and I’m so happy I was able to turn the focus of the story onto the secondary characters from the first book, Owen and Maltok, and give them their happily ever after.

It’s an exciting read and I hope that everyone who picks it up enjoys it as much as they would a DC Juris book. *winks*

If you’d like to learn more about my books, stop by my website www.amylealyn.webs.com or my blog www.amylealynromance.blogspot.com and leave me a message! 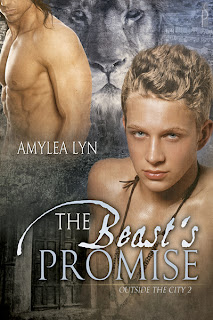 Owen Sanders has a lot on his mind. Ever since being kidnapped from the City, he's been trying to get back in order to rescue the twin baby brothers he had been forced to leave behind. The only thing stopping him is leaving behind his newly found mate, Maltok, and the feelings he has for the other man.

Katrian Co-Alpha Chief, Maltok doesn't know why his human mate refuses to bond with him. When he finds out about Owen's forgotten family, Maltok is hurt that the smaller man would keep something so important from him. Maltok agrees to help retrieve the children on one condition; Owen must agree to mate him when they return to the Village. Owen reluctantly agrees.

The two men begin their journey and, on the way, learn that some misunderstandings must be resolved before they could have hope for their future. And when the City retaliates against their actions, the two men must make a decision that could save them all…

And possibly destroy the City forever.

Two little boys, so alike in image and so very different in temperament, curled up together in the small twin bed, sleeping soundly; dreaming of toys and the games they would play in the morning. Neither heard the sirens wailing in alarm or the tromp tromp tromp of the Guard performing a systematic grid search in the vain hope of catching the escaped prisoners before they got away.

Neither knew the danger about to befall them.

The old man heard. He knew something was happening and he prayed to the Founders that whatever was going on wasn't going to affect his oldest grandson, who worked in the Prison. He glanced over at the clock, straining his eyes in the darkness to see the time. Owen should be home now. Where was he?

Lifting himself up off the old, sagging couch, the grandfather ignored the way his bones shook and his joints creaked, and slowly shuffled over to the apartment window, peaking around one gray curtain to peer out onto the darkened street. The long shadows of men on patrol were barely visible in the thick blackness that was this night. They were searching for something; but for what the grandfather couldn't be sure. Who could say why the Guard did what they did?

One of the boys whimpered in his sleep and the old man let the curtain fall has he hobbled over to their bedside. Lightly rubbing the small boy's back, he soothed the restless child back to sleep, smiling slightly when he clung a bit tighter to his twin.

"Micah," he whispered softly as he carefully pushed a fall of white blond hair off the boy's brow. He looked over at the identical twin, smiling at the little gray toy car clutched in one small hand. "Lucah," he said with a light laugh. He could have sworn he'd taken the toy away before bed, but wasn't surprised the boy had managed to find the little car again. Lucah could be relentless when he wanted something.

He took after his good-for-nothing father in that way.

They were both so small, taking after his dearly departed daughter in size and form; and in sleep they looked so sweet, the usual mischief and teasing smiles missing, causing the boys to look like little cherubs. They were so much like their elder brother; smart and quick, with a ready smile and laugh for the old man who loved them like they were his entire world.

But that smile has been missing for a while now, he reminded himself, as he thought about the twins’ elder brother.

Looking over to the clock again, he tried to ignore the anxiety filling him. Owen should have been home almost ten minutes ago. It was so unlike him to be late. The grandfather prayed to the Founding Fathers that his grandson's delay wasn't caused by the drama going on in the streets.

Twenty minutes later he had nearly worked himself into a fit, the constant wails of sirens and the stomping of Guards setting his nerves into a frenzy, when he heard the sound of footsteps outside the door.

"Finally," he sighed in relief, making his way over from the window he'd been looking through to the door. He had walked about halfway there when the door suddenly burst open, the small implosion knocking him off his feet. He lay on the floor in a daze, as Guard after Guard rushed through the broken door, the sounds of their boots on the shards of metal grating loudly, searing into his memory for all time. The distant sound of children screaming pulled him back from the fog he'd fallen in to, and suddenly he realized it wasn't his mind that was foggy, the room began to fill with a white, cloying mist.

Gas, his hazy mind informed him, and the grandfather tried in vain to get a breath into his straining lungs. But the action only served to let more of the toxic fumes into his body, and he was too frail to handle the poison filling him.

"Where are the prisoners?" Someone asked from close by, but the grandfather couldn't answer. Looking toward the voice, he saw a gas mask covered face peeking through the gray cloud surrounding him. The image came from his most hidden nightmares and something he was sure none of them would ever forget. He strained his ears for more sounds from the boys, but the room was eerily quiet.

The twins? he thought, even as his body began to seize and his internal organs started to shut down. Why aren't they crying? Where are the twins? Owen?

"Where is your grandson, Owen Sanders?" Another voice asked.

The grandfather opened his mouth to respond, but nothing came out but a croak.

"Forget it," a voice replied, and a new masked Guard filled his vision, a pen light shining into his sensitive eyes. "They're not here. The old man doesn't know anything." A gloved finger pressed against his throat, and the grandfather could actually feel his slowing pulse, as he felt sure the Guard could. "He's a goner. Body can't handle the gas."

"What about the kids?" Someone asked, and the grandfather wanted to plead with them to spare his grandchildren, if only he could find the breath. "They've gotten a good dose of the gas too."

"Put a mask on them, and take them to the Orphanage. Let them deal with the kids if they die." The masked Guard he could see replied.

The masked Guards stood up, and the grandfather could only watch in horror as his two grandchildren's limp bodies, little faces covered in large black masks, were carried out of the room and out through the broken front door. One of the Guards stopped at the broken metal door, and sealed the doorway with a plastic covering, preventing any more gas from escaping the apartment and into the other residences.

The old grandfather was left there, lying on the floor, body slowly succumbing to the toxic gas infecting his bloodstream and raced through his body.

As his eyes closed, feeling too heavy to keep open, the old grandfather said a final prayer, even as his lungs stuttered and finally stopped working.

Holy Founders, who created the City with such care and love, please watch over my grandsons. Keep them safe, and let their brother find them before it is too late. Please watch over them all.

He died there on the floor, alone, another victim of the City's cruel punishments.

Oh Owen, where are you?