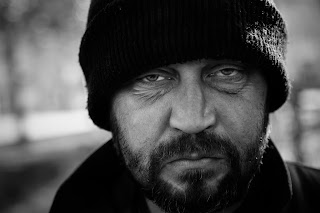 I have stalked him for a long time. Days. Weeks. Months. A year? I am no longer certain. Time has stretched out and blended into one unending stream of craving. He is beautiful, though he does not know it. Even as an unkept mess, his inner light shines. In the ancient days, we would have called him a wretched beggar. Now the politically correct term is displaced. They assume him unwanted. Unloved. Perhaps he is. By them.
I walked by him as I did every night, hidden in the shadows. But that night, he raised his head and squinted into the darkness. Seeing me? Sensing me? I stood there waiting, for what I still do not know. Perhaps some sign I should leave off my course. But none came, and I stepped forward into the glaring light of the street lamp. It dimmed and hummed louder as I approached. His nose twitched. But his eyes never left mine.
"I can end your suffering," I whispered.
He backed away from me. "I don't want to die."
"Not death. Not exactly." I stepped closer and ran my hand over his arm.
"I'm not like that," he muttered.
"Not like what?"
"Men. I'm not into men."
I raised my eyebrow at him. "I have been watching you."
He nodded. "I know. I've seen you."
"Then you know I saw you sit by his corpse for days, unmoving, uneating, barely breathing. I thought you would die from it. Do not tell me you did not love him." I had no idea who the other man had been, but my vagabond had cared for him.
He turned away. "As a brother. Nothing more."
I chuckled and he looked at me. "I wonder..." I stepped close to him, leaned in and sniffed his neck. The tang of sweat and filth filled my nose, assaulted my senses. But the sweet scent of his blood hovered just under. "Would you kiss your brother's frozen lips so fondly, I wonder?"
He sighed and glared up at me. "I know what you are."
"Let us not go all Twilight, shall we?" I chuckled and he frowned, and I chuckled harder. "I am what I am. And you...you can be more than what you are. If you are willing."
"Does it matter if I'm willing?"
My turn to frown. "Of course it does." What kind of monster did he take me for?
"You're evil." He turned away from me.
I grinned and ran my tongue across one of my fangs. "Evil is a point of view, and I see from many angles.  In the illumination given us by truth, the right and the wrong become clear, clear as glass, pure as white snow.  But darken the room, search out those shadowy places in the back of your mind, areas where the gray and the pale look bright, and decisions become less important and easier, like kissing the one your mother warned you about behind the bleachers in the gym.  Or taking the offer of a creature you cannot hope to understand yet. Irresponsibility. That is what I am. Evil, if you will, but surely evil simplified." I laid a hand on his shoulder. "The decision is yours. Stay in this squalor. Unloved. Unnoticed. Unwanted. Or accept my offer of a different world." I leaned in and placed my lips close to his ear. "A world in which you are the one in control. A world in which you beg for nothing, and no one will stand in your way," I whispered.
He turned back to me, raised those dark eyes up to mine, leaned his head to the side in invitation.


Ah! There it was. The moment when skeptic became believer. When saint became sinner. When wrong became right. When meager need became raging necessity. I slid my hand around to grip the back of his head and pierced his flesh with my teeth.
Posted by Marci Nichelle Jansen at 6:21 PM