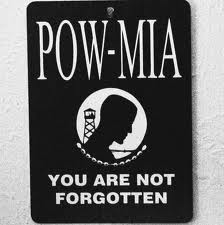 Link back to the hop

I've always had a soft spot for military personnel - I have a lot of family members in various branches, and growing up, I wanted to join. Health issues kept me out, but I did participate in Air Force Junior ROTC in high school.

My father was nearly deployed to Vietnam, but ended up leaving the Army instead. It was a double-edged sword, because he was a sniper (the man won tons of medals and awards for it) and would've done very well, probably. On the other hand, if he'd gone and hadn't come back, I wouldn't be here.

Several of his comrades did go, and two of them never came back. One was killed, the other was listed as MIA.

I spent a lot of my childhood hearing stories about my father's military service, and about the man who got left behind. I used to sit and think of him a lot, even though I'd never met him. I used to wonder if he was alive or dead. If he was alive, where was he? Still in Vietnam? Was he living in a prison camp? Was he hiding out in the jungle? Had he integrated into the country and was he living a happy life with a Vietnamese woman (or man!) and maybe he had some kids?

And, "By the late 2000s (decade), the remains of over 700 Americans killed in Southeast Asia had been returned and identified. Efforts continued to recover nearly 1,800 Americans who remained unaccounted for. Working jointly, American and Vietnamese experts focus on “Last Known Alive” cases, which involve missing Americans whom the U.S. believed might have survived their initial loss incident. Outcomes of these investigations helps resolve the live prisoners question. The U.S. has identified 296 individuals as Last Known Alive cases in all of Southeast Asia, and following full investigations, the Defense Department has determined that more than 190 are deceased."

To honor this day, I'll be making a $25 donation to Cell Phones for Soldiers in the name of one lucky winner!

To enter, just leave a comment below with your e-mail. That's it. :-)

****PLEASE BE AWARE:  I write GLBTQ romance. GLBTQ stands for gay, lesbian, bisexual, transgender, and queer. This means my works feature same sex relationships AND same sex sexual acts. If being associated with that kind of a blog isn't your cup of tea, kindly pass on to the next blog in the hop and leave the spot open for someone else. Thank you.****