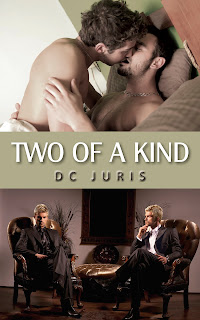 Vincent and his childhood friend Eric became a couple after Eric initiated him into the pleasures of the Playhouse, a refuge for men to act out their submission/Domination fantasies. Their relationship is warm and loving, but not exclusive. Eric is a “switch,” and since Vincent is a submissive, Eric sometimes looks to his own Dom, Anton, for satisfaction—causing Vincent to feel jealous and insecure.

Then Anton’s uncle dies and Dimitri—Anton’s twin and a troubled, surly, irresistibly sexy version of his brother—comes for a visit. When Dimitri sets his sights on Vincent, ridiculing his supposed sexual passivity, Vincent begins to wonder: is he really a sub, or a switch, like Eric? In the first blush of their relationship, Vincent and Eric reveled in their connection, calling themselves “two of a kind.” Perhaps they are also alike in ways that challenge their current power dynamic.

“Can’t I?” He took a long drag off the cigarette, held the smoke in, and then puffed it out slowly. “Guess we’ll have to go outside, then.”

Vincent glanced over at Eric.

“Oh, I forgot. Puppy has to ask permission.” Dimitri ruffled Vincent’s hair. “You want me to go ask Big Bad Eric if I can take you for a walk?”

Who the hell was Dimitri, anyhow? Someone he had just met. Someone who two days ago he didn’t even know existed. But maybe that was what spurred him to act … what made him put one foot in front of the other, following Dimitri blindly until they were in an alley behind the funeral home.

The atmosphere outside was stifling; a veritable cloud of humid, thick heat surrounded them. In the distance, sounds of traffic echoed—honking horns, revving engines, and loud blaring music. But even these receded into the distance as he stood in Dimitri’s presence. Like a moth to flame, Vincent dared to get closer.

“I just don’t get why you can’t be equals,” Dimitri was saying. “Why he treats you like such a weakling. Of course, you act like one when he’s around. You don’t do it as much when he’s not. Ever notice that?”

Vincent bristled. How was it a complete stranger could read him so well? But Dimitri wasn’t a complete stranger, was he? Dimitri was Anton’s twin. It stood to reason that he had some of Anton’s innate ability to read people and situations. To control them. Which was exactly what he was doing now. And Vincent had fallen for it. Hook. Line. Sinker.

Vincent shook his head. “I’m not weak, and Eric knows that. If I chose to submit to him, that’s exactly what it is—my choice.”

“Not because that’s the only way he’ll have you?” Dimitri dropped the cigarette and ground it out under his heel. He moved closer and trailed his thumb down the side of Vincent’s face. “Because, you see … I think I would rather have you a different way. You’ve got spunk, and I’m not talking about the kind dripping from your cock right now.” He grazed his other hand down the front of Vincent’s jeans and nodded. “I know you want me.”

“No.” Vincent shook his head. “I don’t.” Though his hard cock clearly did.

“You trying to convince me, or yourself? Hmm?” Dimitri reached down and grasped one of Vincent’s wrists, grinned when he tried to pull away. “That’s right. Fight me. Make me earn what I get. Don’t just give it to me because I ask. Make me earn it.” He leaned in and licked Vincent’s neck.

“Eric has earned it.” Eric. Vincent struggled to hold onto that thought. Eric. He loved Eric. Of course he did. He knew that beyond a shadow of a doubt. So why was his cock hard now? Why did he want to give into Dimitri? He would only end up hurt, physically and emotionally. Dimitri would take what he wanted, no matter if Vincent felt he deserved it or not. God, why was that thought so delicious?

Dimitri threw his head back and pulled in a deep breath threw his nose; let it out in a harsh bark. “That’s the spirit.” He squeezed Vincent’s wrists harder, hitched his knee higher.

Panic—thrilling, raw, and real—scorched through Vincent. He struggled in earnest now, but no matter what he did, his movements only increased the contact with Dimitri. He writhed against the wall, caught between need and fear, desire and disgust. What if Anton rounded the corner right now? Worse, what if Eric did?


I'm also giving away a free pdf copy of "Two of a Kind!"

To enter, just leave a comment below with your e-mail address. Easy peasy!

And now, I'm supposed to tell you the following:

There are over 40 blogs joining the hop. Click on the button to visit the next blog! When you click on the button, you'll be taken to the next random blog that you haven’t gone to visit yet. The system takes care of “remembering” which blog it has gone to or not, and will forward you to a blog it hasn’t visited yet. If you haven’t registered at TRR and/or logged in, please click on the button as well to go to the right page on TRR to do so. You can space yourselves out over 4 days, from September 27 to 30. The hop will start on September 27, 12:00am EST and will end onSeptember 30, 11:59pm EST.