Please give a warm welcome to my first ever guest blogger, Amber Kell!  Amber is here as part of her November Birthday Extravaganza, in which she's been hopping all over the place sharing bits and pieces of a free story! If you've missed any of the installments, you can find links to them all at her blog here

And now, on with the story! 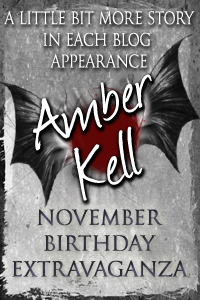 Accidental Alpha #26
As it turned out the family dinner fell on the night before the
full moon.
“You’re father isn’t going to invite any unmentionables to dinner again, is he?” Fenris asked as he tossed aside the clothes Stanley had chosen and pulled a suit from a dry cleaning bag.
“If he did I wouldn’t be able to mention it,” Stanley teased. “And where did I get a suit? I’m pretty sure none of my other outfits were that nice.” Although he did wear a suit to his old job none of his previous suits looked like they featured in a menswear magazine.
“Consider it one of the perks of being the Alpha. You’re mate does your shopping.” Fenris gave a sniff. “From what I can see you need it.”
Stanley shrugged. “You didn’t dress up to visit with my parents.”
Fenris smiled. “I thought you’d tell me if they were formal. Besides I don’t like your father. I would’ve dressed up for your mother though. She’s my favorite new inlaw.”
Laughing, Stanley took of his sweater and jeans and dressed in the outfit Fenris brought. “Better?”
Fenris stared at him so long Stanley worried he’d done something wrong. “Huh, oh sorry I was just admiring the scenery.”
Shaking his head Stanley smiled at his mate. “If we’re going to get to this thing on time you need to get dressed too. Why did you decide to have the dinner at that new Italian place anyway? My mother would’ve loved to cook.”
“Because I know your father won’t start anything and my parents won’t argue if we’re out in public in front of the humans.”
“Why didn’t we just have dinner with your mother and then your father? Why everyone at once?” Stanley was missing something in this whole arrangement he just knew it.  “You’re holding out on me about something.”
Fenris froze in the act of tying his tie. “I think holding out is a rather strong statement.”
“You’re handling me again aren’t you?” Stanley narrowed his eyes at his mate. Over the time they’d come to be mates, Stanley had noticed Fenris’ role was to keep the alpha happy. And if Fenris thought Stanley would be happier unaware, the other wolf kept things from him.
“Now love, it isn’t a matter of keeping things from you. Just I’ve always thought my parents should get back together but there’s only a limited number of reasons you can get them in the same room.”
“So you’re using our dinner to get your parents to sit down at the same table. What about your mother’s husband?”
Fenris shrugged. “I’m sure we can find him a new wife.”
A startled laugh burst out of Stanley. “What if he doesn’t want a new wife?”
“Then he’s out of luck. Mates shouldn’t separate.” Fenris said firmly. “I’ve known this all my life but they still stay apart. I can see my father still pines for her and my mother doesn’t look happy. Now that I know what it’s like to have a mate I’m even more determined that my parents get back together.”
Stanley sighed. Wrapping an arm around Fenris he pulled his mate close. “Babe, you can’t organize other people to do what you think they should. Your parents have to choose their own paths even if you think they’ve made the wrong choices. It’s their choices and they have to live with the mistakes they make.”
Fenris patted Stanley on the chest. “My parents deserve to be together.”
“I’m not going to change your mind am I?”
“Nope.” Fenris said.
“At least make sure everyone knows it isn’t my fault when this entire thing explodes in our face.”
“Of course dear.” Fenris dressed quickly and led the way out the bedroom. “It’s my job to make sure you always look good.”
Stanley looked down at his designer suit. “So far you’re doing well in the clothing let’s hope your people sense is as good.”
Fenris gave him a wolfish smile that did nothing to reassure Stanley. “My parents won’t even know what hit them.”
Despite his mate’s cheery outlook Stanley had a feeling there was no way this night would work out. “Maybe it’s not too late to be a missing person,” he mused on his way out the door.


Posted by Marci Nichelle Jansen at 3:34 AM