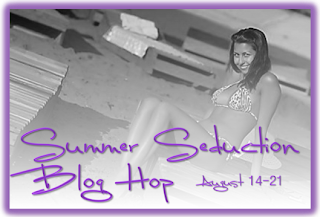 Well, with double surgery looming on the horizon, my summer's not turning out to be all that sexy. However, the same can't be said for my two sexy characters, Garrett and Aaron from "Alone Together."

For my part in the hop, I'm offering up a free pdf copy to one lucky winner! Just leave a comment below with your e-mail address and you'll be entered to win. 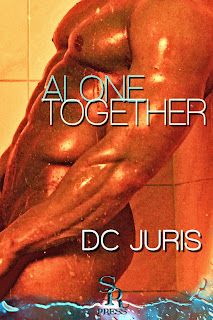 Blurb:
Ever have one of those days where you open your mouth and trip over everything that comes out?

Garrett Morris is having a bad day. On a scale of one to ten, it’s a twenty. Mind you, it should be going much better, considering he’s seeing Aaron, the secret love of his life, for the first time in a little over two years. But his wife’s homophobic family and his own big mouth keep getting him into trouble. If he’s not careful, he’ll lose everything—wife, job... and Aaron.

It started innocently enough. Two men married into the same family with similar interests—football, movies where things went boom, and pizza. No big deal, right? And for seven years, it wasn’t. But then the accident happened. Some drunken man in an SUV had plowed into my parents’ car. My mother died instantly. Never felt a thing, the doctors said, though I doubted that at the time, and still do. My father’s body had somehow lived, but not his mind. Trapped in a coma, Dad lingered while the family fretted and squabbled, while doctors tried to reach lawyers to get the living will everyone insisted he had.

I was the eldest son. Dad had no living brothers or sisters; my grandparents long since gone, I was the next of kin. The living will was clear. Dad didn’t want drastic measures. No cables or tubes. They had already violated his wishes by the things they had done. The answer seemed clear. Pull the plug. Hadn’t made it easy. My sister had squawked about the possibilities of modern medicine—Dad had written that living will years ago, after all. Things had changed. My wife Debra had screeched about loyalty and honor and my responsibility to my father.

And then it happened. I retreated to the hospital chapel, not for any religious peace—despite my teaching job at a Catholic school and despite being dragged to church with my wife every Sunday, I was a staunch closet atheist—but for solitude and grief. Time to think. I remember it even now, clear as day. My brother-in-law, Aaron had found me as I stood in front of a porcelain statue of the Virgin Mary.

I sighed and nodded. “I might as well be. I’m not the one hooked up to a bunch of machines without my consent.”

“That’s not your fault. You didn’t know what the living will said. It easily could’ve said do everything.”

“How did I not know what my own father wanted?” I held my hands wide.

He shook his head and shrugged. “I don’t know what mine would want. Really, who talks about that stuff? We live our lives in a state of invincible denial.”

“You know what you’re going to do?”

“Pull the plug.” I sat down in the pew with a groan, wincing at how hard the wood was. “That’s what he would want. Says so right there in black and white. I just...” I shook my head and swiped at welling tears.

Aaron circled in front of me and knelt on the maroon carpet. “It’ll be okay. You’re doing the right thing.”

“Don’t you feel it?” Aaron laid a hand over my heart. “Isn’t that what’s got you? Everyone’s arguing, but you know what needs to be done.”

“Garrett,” Aaron whispered. He pulled me close and held me. “You didn’t kill him, baby.”

His embrace was warm, and being called baby in that gruff, manly voice of his made me want so much more with him. Secretly, I’d always found him attractive—so strong but so tender at the same time. Maybe it was the grief. Maybe it was the fatigue. But the scent of him, the heat of him, drove me insane. I leaned back just enough, tipped my head, and rubbed my lips over his.

He responded, maybe on instinct, maybe on purpose, but the result sent a jolt of longing through me.

Aaron pulled back and wiped his lips. “I’m sorry.”

I shook my head and tugged him forward for another kiss. I couldn’t let him regret this. I couldn’t bear to think of that.

At length we parted and he pressed his forehead to mine before he stood. “Someone’s bound to miss us and come looking. We’d better head back.”

My cell phone rang, jerking me out of my reverie. I grinned as the image of Aaron appeared on my screen. I almost hated to swipe it away, but I did. “Hey.”

“Hey yourself. How’s things?” he asked. His voice was muffled, as if he was talking around a mouthful of something.

“What’re you eating?” My grin became wider—I knew what his answer would be. Our weekly conversations had quickly gone from simple pleasantries to sexual innuendo to damn near phone sex over the past seven months.

Aaron chuckled. “Not anything as delicious as your cock.”

I shifted in my seat, his words making me hard. “How would you know? You’ve never had my cock in your mouth.”

“More’s the pity. Maybe we should fix that in a few months.”

Dread tingled up my spine, warring with nervous excitement. I’d forgotten about the family get-together. How I’d forgotten was beyond me. We went every year. Since my parents’ accident, I’d spent the year alternating between feeling like I couldn’t wait to see Aaron and feeling like walking up his driveway would be tantamount to walking down death row.

I shook my head and cleared my throat. “Yeah, I’m still here. Listen…” I trailed off though. What was I going to say? That I didn’t want him? I couldn’t really refute seven months of verbal proof.

“Two kisses,” I corrected. Two wonderful, hot, soul-wrenching kisses, the likes of which I’d never experienced before. Or since.

“Two kisses. Both of which you initiated, if I remember correctly.”

“It was your fault,” I teased. “Sitting there all sweet and caring like you were. What was I supposed to do?”

“Right. Any sane man would’ve kissed me.” He laughed and slurped up the rest of whatever he’d been drinking through a straw. “You know I want you.”

He wasn’t asking. Of course he wasn’t. I’d already admitted to jacking off to the memory of those kisses, as had he.

“Yes, Aaron, I want you.” I rolled my eyes even though he couldn’t see me. “Is that better?”

How he managed to convey smug satisfaction and victory in one word would remain a mystery to me.