This one was supposed to appear on a blog - I won't give the blog name - but after sending it in, they never posted it. I e-mailed them several times and got no response. 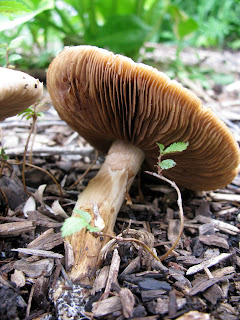 I've always been fond of mushrooms. Not eating them, but the look of them. I like the different shapes and colors. I enjoy the whimsy of the way they just pop up randomly and spread like wildfire.

In my mind, tiny toadstools always evoked images of fairies and gnomes, unicorns and castles - far away lands and fantasy adventures. That is, until my husband suggested mushrooms resembled penises, and that was why I liked them. O.O My beloved, fantastical harbingers of innocent dreams suddenly turned into something completely different.

At first, I argued with him. Mushrooms, after all, aren't all shaped the same. There's coral shaped, funnel shaped, trumpet shaped, puff ball shaped, lampshade shaped, noodle shaped, and even - yes, I'm serious here - an octopus shaped mushroom. How could something so varied look like something so…well…unvaried? Yes, penises come in different lengths and thicknesses, but they're basically all the same general shape. Let's face it - if he's got an octopus penis, he's probably not human. (Although if you find him, send him my way, 'cause I'm betting that's pretty damned entertaining.) 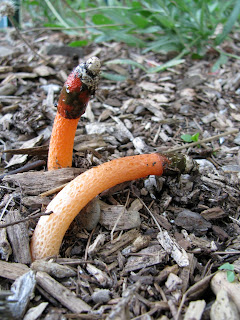 And then one day I took a good look around. At that time, my kitchen was decorated in a mushroom motif. I had mushroom salt and pepper shakers, spoon rests, wall art - you name it, I had a mushroom version of it. And none of them…none…were coral shaped, or funnel shaped, or trumpet shaped, or puff ball shaped, or lampshade shaped, or noodle shaped, and no, sadly none of them were octopus shaped. I stood in the middle of the room and realized I was surrounded. By penises. 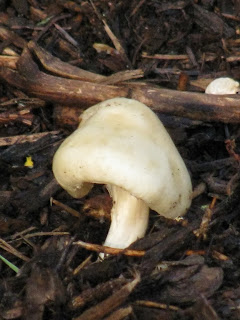 Maybe my husband was right. Maybe my transfixion with fungi stems from my gender issues. Maybe my fervent desire for a penis of my own, attached to my body, has manifested itself into an attraction to mushrooms. Maybe it's an outward expression of an inner feeling of insignificance and of being half of a whole. O.o