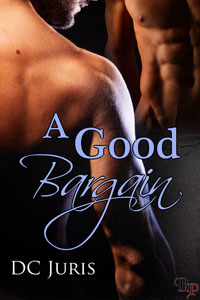 Awkward and unsure, David has finally reentered the dating scene. A hot, young stud-muffin named Brandon seems like the perfect start, but things get complicated when Brandon makes a startling confession. Is Brandon the right choice for David, or did David just get way more than he bargained for?

Fuck, I’m old. The thought forty isn’t old followed immediately—David had forty-year-old friends, and he didn’t consider them old. So what if he couldn’t run five miles every morning anymore? So what if he went to bed at ten now, rather than staying up and watching the late reruns of Family Guy at two AM like he used to? Age changed a man, and a man had to roll with it. Couldn’t fault him for being practical. But the hot young thing on the couch next to him expected... Oh, god. What did he expect?

“I don’t want to have sex. I mean...I do. There’s nothing wrong with you or anything. I don’t do this kind of thing. I don’t bring boys home. Men,” David corrected quickly. “I don’t bring boys home at all, of course. I’m not into that sort of thing. Not that I think you are. Not that there’s anything wrong with it. I mean...well of course there’s something wrong with it if the boy’s a kid, like, really a kid. Who wouldn’t think that was wrong?” Well, this is going to hell in a hand basket.

“I was gonna ask if you wanted to watch a movie. I don’t do this kind of thing either, yanno.”

“Whatdaya have that’s good?” Brandon came to stand behind him, peering over his shoulder at the shelf. The heat of Brandon’s body swirled around David, and his cock swelled.

“What haven’t you seen?”

“Is that Lake Placid? I haven’t seen it. I know it’s old, but”—his gaze swept up and down David—”I kind of like older things.”

David swallowed hard and fumbled for the DVD in question. “Lake Placid. Great choice.” He turned to head over to the television, but found himself nose-to-nose with Brandon. “Um...”

Brandon reached up and slid his arms around David’s neck. “Don’t worry. I won’t bite unless you ask me to.” He tugged David’s head down for a kiss.

Their lips just barely brushed together, but David’s cock leapt and his toes curled from the touch. He pulled away with a small gasp. “Oh. Wow.”

“So, how long have you been out of the game?” Brandon sauntered over to the television. He bent down to retrieve the remote control from its spot on top of the DVD player, his jeans tightening to outline his perfectly formed ass.

David stifled a groan and tore his gaze away. “About eighteen years. Does it show that much?”

“Holy shit, man. You haven’t gotten any in eighteen years?”

David snatched the remote away and gestured to the couch. “That’s not what I said. I’ve gotten plenty.” Just not from men.

“You were with a partner or something?” Brandon flopped down on the couch and slung his left leg over the arm while David tried not to stare owlishly at his crotch.

Brandon shook his head. “No you weren’t. Fags couldn’t marry back then.”

“No, it’s not. It’s a hateful, spiteful thing to say, and if you’d grown up like I did, you’d understand.” Anger rose in him, sending tremors through his hands.

“Don’t.” David held up a hand to stop him from uttering yet another disgusting profanity. “I get your point.” He stared hard at Brandon, wondering what the hell had possessed him to go into a bar and pick up some youngster, probably the same age as his own son. “Fuck me.”

“Not literally,” he said, shaking his head and scrubbing his hands over his face.

“We shouldn’t do this. You should go.”

Brandon stood and stepped toward him, and when David took an involuntary step back, Brandon held up his hands in a gesture of surrender. “I said I wouldn’t bite, remember? You came into the bar because you were looking for something. Wanting something. Maybe even needing something. Right? So, why don’t you let me help you find it? I’m not talking about fucking, although, I gotta admit, if you said jump I’d say how high.”

“What do you suggest?”

Brandon came within touching distance. “Let’s just watch the movie, and see how the evening goes. Then let’s see how the night goes, and maybe how breakfast goes, if we get that far.”

“Well, I usually have lunch after breakfast, followed by dinner. I tend to repeat that daily.” He placed his hands on David’s upper arms, curled his fingers around the muscles there. “You’re not too shabby for an old geezer, you know?”