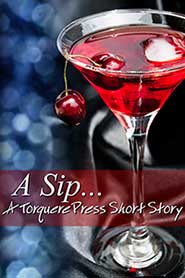 "Cupid Knows" was originally part of the "Shot Through the Heart" anthology, and is now being re-released as a stand alone book. This is the story of how Jack and Alan met!

Jack has been dreaming about Alan ever since they met at a game. Can he convince Alan to take a chance on a Valentine's Day meeting when Alan has something to hide?


Ugh. Valentine's Day. If there was a better way to make a single man feel like crap, I didn't know what it was. I stomped the snow off my boots and stared hard at the stupid little cut outs of hearts and cherubs adorning the bank door as I opened it and entered. Inside the décor was even worse; a giant inflatable Cupid, complete with bow and arrow and cheesy smile, stood off to the side. Cupid Knows You Should Bank at Mid Atlantic!, the sign above him proclaimed. I shook my head, wondering if I should bother to point out that anyone who was actually inside the bank probably already did bank there, or would shortly, and wouldn't it make more sense to put Cupid out on the curb?

I had decided it couldn't get any tackier when I turned and spotted little white bears hanging from the stanchion ropes. I smirked at the words Mid Atlantic Cares emblazoned across their furry chests, imagining bank tellers armed with tattoo guns hunting down polar bears. And then it happened: I looked up…and stifled a gasp.

I didn't know his name. Had never even formally met him. I'd hugged him at a football game. A playoff game, to be more specific. Our team won. I say "our team" since we had both been wearing team shirts. In the magic of the moment of the final ticking of the game clock, as the crowed had screamed "five…four…three…two…ONE!!!" we had turned to each other and hugged. That was it. Nothing more. No handshake. No "Hi, my name is…" Nothing. Stupid, insignificant nothing.