Now, I knew my choice of name would cause some...confusion. And this morning, I was met with no less than 25 FB messages and 10 e-mails.

I'm grateful to both groups - I honestly am.

Yeah, I'm not grateful for you two. You two can kiss my ass.

So. An explantation is in order, it seems.

The first thing that comes to my mind, of course, is that it's nobody's galdurn business *what* I do with any part of my life, especially my legal name, since none of you address me by it anyhow.

The second thing that comes to my mind, of course, is that being in the spotlight - any spotlight, even one so small-focused and dim as our industry's - gives people the belief that you owe them something of yourself. It gives people the belief that they have a right to know certain things - your sexuality, your gender, who you sleep with, what your favorite ice cream is. Chocolate peanut butter swirl, if you're wondering.

So the overriding question seems to be - am I male or female? I've chosen an obviously female name. Does that mean I'm female, and no longer transgender?

The answer is... I don't know. I know it's irritatingly disappointing when someone can't provide you with basic answers about themselves, but that's the truth of the matter. I don't know *what* I am. I do believe I warned you about this in a blog post the other day, titled "Identity Crisis."

I'm not certain what my gender is, or what pronouns you should use.

Here's what I know about myself, with 100% certainty:

I love Star Trek TOS. I like baking, but only cupcakes. I like food, sweet wine, horror movies, sock monkeys, math (that's a new one!), candles, incense, and mushrooms - collecting items, not eating them - I hate eating them. I hate having dirty feet. I don't like large bodies of water. I love the city of New Orleans. I hate the West Coast - no offense, it's just too damned far away, and it takes too long to get there. I love photography. I love to write. I'm a parent to 8 wonderful beings - The Boy, The Older Boy, Wallace, Higgins, Mindy, Lollypop, Sassy, and Tina Jean. I miss my baby girl Ginger and my baby boy Duncan every day of my life. I have an irrational, deep, abiding love for William Shatner - that man could murder a baby or a nun, or a nun holding a baby, and I'd believe he was fully justified. I have a list - and Hubby does too - of celebrities we can have sex with, should the situation arise, and still stay married - it's call the Allowed List. Mine is much longer than his. I'm typing this blog with painted fingernails. The color is called "Bizerk Turq" by Funky Fingers, and it's a bright, minty sort of sea green. My socks are black with little pink hearts and lace at the ankle. I have more want than brains when it comes to spending money - my current PayPal Credit balance is over $3K, and I'm not ashamed of that. I believe my house has feelings. If I found out I only had a few months to live, I've got a mental list of people who would have about 24 hours left on this planet. I do not love my mother. I am pondering getting a perm and growing my hair out. I like data entry. I believe everyday should be met with a mug of hot tea, and ended with an episode of Star Trek TOS, because really - there's nothing tea and TOS can't fix.

If all or any of that tells you which gender I am, then you're a more perceptive individual than I.

Ultimately? Here's what I think: 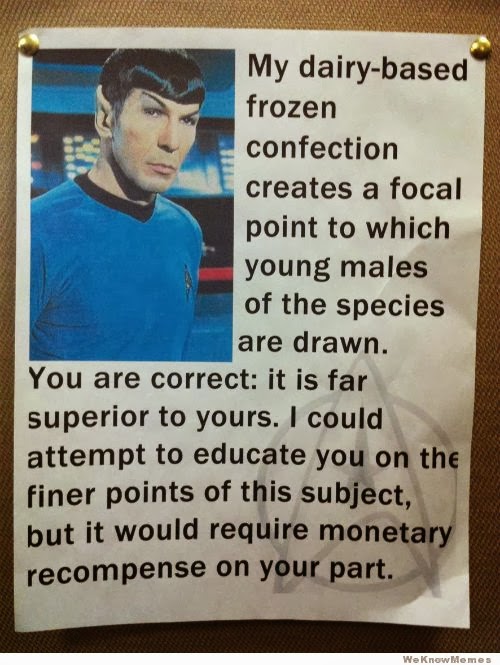