Backlist Feature: What the Lady Wants 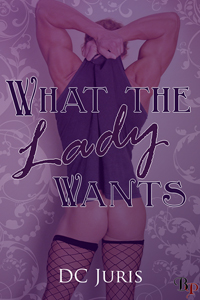 
When Keenan's lover, Naro, reveals the deep, dark secret of his past, Keenan must decide how strong their love really is. But Keenan has a secret of his own -- one that's right up Naro's alley.

Candlelight. There should’ve been soft, flickering candlelight, instead of the almost harsh glow of the light orb swinging above them. And soothing music—Keenan should’ve paid someone to stand out- side the bedroom door and play a kempla flute for them—instead of the distant howls and calls of animals floating in through the window. They should’ve been surrounded by wisps of incense—that spicy- sweet blend the heavyset apothecary always sold at Festival—not the same old scent of dinner lingering on the air, mixing with the smells of the world outside. For that matter, he should’ve cooked something special tonight, roasted a bruta pig or filleted a tarkin.

All these thoughts went through Keenan’s mind as he trailed kisses down the right side of Naro’s neck, across his collarbone, then nibbled a path back up to those full, luscious lips. He would’ve liked to have staged the night a little better, made their first time more special, but Naro’s urgency and enthusiasm had convinced him otherwise. At least he’d changed the bedding yesterday. Something had told him to use his best, softest sheets and his nicest—or least tattered, anyway— top blanket: the heavy one with the gold ribbon running around the edges and the birds stitched onto each hand-quilted panel.

The big wooden bed creaked as Keenan leaned over and reached to the bedside table for the bottle of oil—the very expensive, hard to find glandra flower oil he’d had ferried in four months ago in anticipation of a night like this. He’d spent his every waking second for the past year waiting for this moment, and, now that it was here, he couldn’t imagine a more perfect way to spend the evening, poor planning aside.

“Wait. There’s something you should know first.” Naro pushed against Keenan’s chest and sat up a bit.

Keenan choked down a curse. He particularly disliked when anyone anywhere uttered those words, especially when the anyone was a man he was about to fuck, and more especially when the anywhere was his very own bed where they’d already made it half way to doing the deed. Nevertheless, he leaned back and propped himself up on elbow to peer down at Naro.

“It might make you reconsider being with me, but I want to be honest with you.” Naro turned his head to the side, avoiding Keenan’s gaze, and heaved a sigh. “I’m not a man.”

“Your anatomy would disprove that statement.” Keenan glanced down to the erect, dripping cock between Naro’s legs. Definitely male anatomy, and a fine example of such.

“I mean, I am now, of course.” Naro sighed again and squirmed. “But I wasn’t always. I was born a woman.”

Born a woman? Well, that was new. Keenan knew there were babies born sometimes with two sets of parts—male and female—but the Planetary Council usually ordered them killed. And anyway, he’d explored Naro’s body enough to know there was only one set of bits down there. “Care to elaborate on that?”

“My father wanted a boy. He took me to a powerful charmer when I was four and I was placed in a sort of cocoon. A year later, I emerged as a boy.”

“Resexing?” Something Keenan had heard of, though he’d never met anyone who had actually undergone the procedure. From his understanding, resexing was an elaborate process, often painful and quite costly. “Wouldn’t it have been easier just to have another child?”

“My mother had already lost three boys and given birth to two girls. By the time I came along, my father was obsessed.”