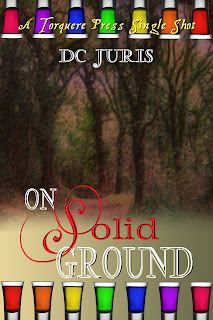 Jack and Alan are back! The couple's world is turned upside down by a break-in, and while Alan takes it all in stride, Jack finds himself faced with something he's never dealt with before. Fear. When panic attacks start to take hold, Jack decides Alan would be better off with someone "normal" and runs away to his parents' cabin in the woods. With the help of Solid Ground Security Systems, and a lesson in love from the most unlikely of sources, can Alan convince Jack there's nothing they can't overcome together?

"I've been telling you to move out of that neighborhood," Craig said, handing Alan a beer. "I don't like the element that's moved in."

"Half our neighbors think we're the element," Alan shot back, taking the bottle from his brother and sitting it down on the coffee table. The last thing he needed was booze. He frowned as Jack sat forward and grabbed for it, twisting the top off and taking a gulp.

Craig made a dismissive sound. "You know what I mean. Tina said she busted someone for meth at the end of your street. Meth, Alan."

Alan sighed and glanced at Jack. Jack didn't appear to be taking things well at all -- he'd been oddly silent on the drive over and hadn't said one word since arriving. This kind of talk wouldn't help his frazzled nerves, either.

"You two should move in here," Tina offered. "You could rent the basement from us. We haven't had a tenant in months. And there's a cop living above you," she added, gesturing to herself with a sweeping movement of her hand. "There are cops here all the time. You guys would be safe."

Alan frowned, running a hand through his hair. He appreciated the offer, of course. And not that the place wasn't nice -- Craig and Tina's basement had a full bath and a full kitchen, high-end accessories throughout, with lots of space and its own private entrance. In truth, the place was probably bigger than his current cramped quarters, which had never really been meant for two people to share.

No, what turned him off was the notion of running. Of tucking his proverbial tail between his legs. Of being forced out. When he and Jack decided to move -- if -- they'd do so on their own terms, not out of fear and cowardice. That Tina had even suggested such a thing made him bristle. "Is that what the world has come to?" Alan asked. "I have to live with a cop in order to be safe?"

"How am I supposed to feel about that?"

"I don't know," she quipped. "Glad that there's a cop willing to let you live with her?"

"Tina's right, baby brother. You should move in here."

"You guys don't understand," Alan argued. "If we move in here, then they've won."

Craig shook his head. "I don't think you understand." He nodded toward Jack. "They've already won."

Jack shifted and lowered his head into his hands.

Alan slid an arm around him, but Jack didn't respond. Debates on the state of society could wait. Right now, Alan had to take care of Jack. "I need to get him to bed."