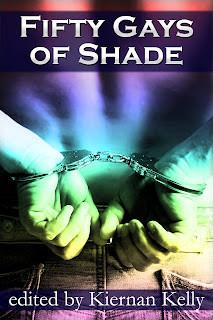 How's that for a fabulous title?

Here's the blurb for my offering, "As You Wish":

The last time Rex trusted a Dom, he was brutalized and left scarred both emotionally and physically. Can an invitation from Grey Shade and an evening with his long time friend, and secret desire, Declan help him find his way back into the lifestyle he'd just begun to love?


And here's a little snippet:

Declan stepped around in front of Rex. He took Rex's face in his hands and leaned in for a gentle kiss. He slid his hands down to capture Rex's wrists, rubbed his thumbs over the scars. "We'll go slow tonight, I promise you. I will not hurt you."

"I trust you." Rex forced the words out through his too-thick-with-emotion throat. He realized his hands were shaking and he balled them into fists.

Declan moved away and went to the far side of the room. "Come."

He spoke the word in a crisp, commanding tone that sent shivers up and down Rex's spine. Rex forced himself to put one foot in front of the other. He tried hard to concentrate on the idea of being bound, of being on display for Declan's amusement and pleasure, instead of his memories. Somehow, he found the gumption to keep moving, to turn, and let Declan guide him to the cross. Declan started unbuttoning his own shirt, and panic rose in Rex like a fever, washing him in a cold sweat. Nakedness meant sex, didn't it? "I want to keep my clothes on," he blurted.

Declan paused in his movements and looked at him for a long moment before speaking. "Would you prefer I kept mine on as well?"

Rex teetered on the edge of control, half way between bolting out the door and throwing himself at Declan's feet. God, how he'd wanted this; dreamt of it, how he'd spent so many years lusting after his friend, wanting nothing more than to be allowed this close. One night, one horribly, horribly wrong night, had changed everything, stolen all his will and replaced it with terror. And the last time... If he shook his head now, if he said no, would he ever get the chance again? "It's up to you," he whispered.

Declan shook his head. "No, it's entirely up to you. You are the sub. You need to tell me what you're comfortable with." He reached out and touched Rex's cheek with the back of his hand. "When I said I'd never hurt you, I meant it."