There's a scene near the end of "Broken Alpha," where Sokel and Sebastian present Rennett with a pair of matching candleholders, to symbolize their joined lives.


"I..." Rennett fought the urge to glance back at the stack of boxes and away from Sebastian's all-knowing gaze. He took a deep breath. "Korden's already done so much. But you and Kel...coming here like this, giving up your lives, your careers. This can't all be for me. I'm not worthy of this."

Sebastian glanced over his shoulder. "Chime in here anytime, sugah."

In answer, Sokel retrieved a wooden box from one of the large plastic containers. He joined Sebastian on his knees in front of Rennett, and Rennett couldn't suppress the notion that an Alpha like Sokel should never kneel, especially to an omega like him.

"We were waiting for Korden, but perhaps now is a better time." Sokel held out the box.

"Well..." Sebastian drew the word out and his cheeks blushed. He ducked his head and offered a sheepish grin. "Since we're doin' this whole cohabitation thang, Kel an' I thought it only right to get us somethin' that symbolized all of us. Don't ya wanna see what's inside? Go on, open it!" he prompted.

Rennett took the box at last and sat it on his lap, lifting the lid and sitting it on the arm of the chair. Nestled inside the box were two items, bundled up in white paper. He pulled back the wrapping to revel a pair of metal candleholders, like the ones presented to newly linked mates as a symbol of family unity. At six inches in height, each consisted of a top to hold a taper candle, an open circle in the middle, adorned with fine metal webbing and a golden spider—ironically, the animal of both theirs and Sokel's family houses—and a flared, bell-shaped bottom. The spicy, rich scent of incense clung to the metal, and Rennett found himself pressing his nose against the top. The top rim of each candleholder bore their family names, engraved into the metal, and on the bottom of each were the words bound by love in Earth script.

Sokel rested his hand on Rennett's knee. "Bastian and I are not here out of pity, or obligation. We are here because we love both you and Korden. You are our family, not by blood, but by choice, and we choose to follow you."

"They're...they're beautiful." He swallowed hard and looked up at them. "I don't know what to say," Rennett admitted.

Sebastian scoffed. "Ain't no need to say nothin' at all."

***
And here are the candleholders. I bought them several years ago from an antique store. And yes, they actually do smell like incense, because once upon a time they resided in our incense drawer. Now they live in my writing office. :-) 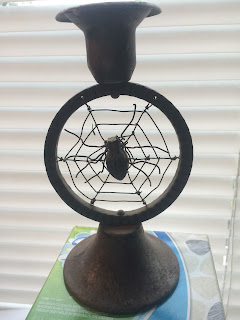 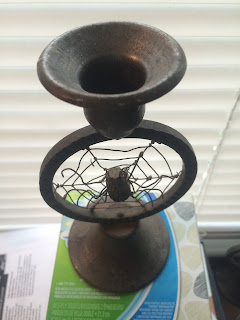 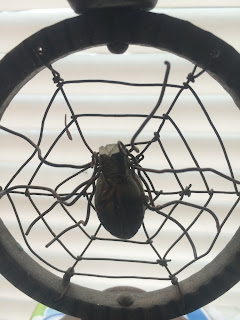 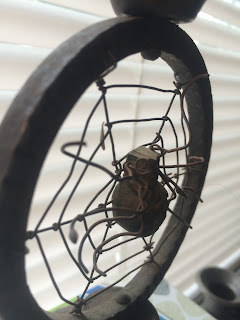 Posted by Marci Nichelle Jansen at 9:00 AM