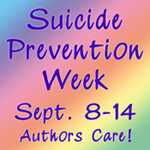 It's no secret to anyone who knows me that I've always had issues with depression. A lot of it stems from the fact that I'm bipolar, some of it comes from having a childhood filled with emotional, physical, and sexual torture and abuse.

In high school, I tried to kill myself. I'm only here now because I called a friend to say good-bye, and my friend had the intelligence to give the phone to his mother, who spent the next two hours talking me down.

Over the years, I've heard a lot of people say things like "nothing could be so bad as to want to die."

There's two things I'd like to say to that.

One - If you've never been there, you can't understand. Everyone handles things differently, so what might be minor to one person could be major to another. You don't know what you'd do if you haven't been in that situation. You might be strong enough. Then again, you might not.

Two - I still, to this day, don't know if I actually wanted to *die* or not. I wanted the pain to end.

I'd tried other ways - I'd tried telling people what was going on. No one believed me. My father was a charismatic individual - he'd give a total strange his last penny or the shirt off his back. He was a hard working man. Nobody believed he could be capable of the things I claimed. Add to that, everyone knew I was always writing stories. I had such a vivid imagination - and it was really quite wrong of me to make up such nasty lies.

Yes. That's what I was told.

My father was clever - he never left any marks on my body that would be visible to anyone. Thus, I had no proof. It was his word against mine, and since my mother wouldn't corroborate my story (my codependent, dry drunk mother....) clearly I must've been lying.

I had nowhere to go, and no way to get there even if I did. I lived an hour by car outside of town, on a dirt road in the middle of the swamp.

I don't think I wanted to actually die. I don't think it even occurred to me what would happen if I went through with it. I just wanted to not hurt, to not bear any more pain, to not suffer anymore.

The only thing that went through my mind was that I owed my friend Julian a good-bye, an explanation. He'd been my rock, though I doubt he knew it, through a lot of really difficult stuff, and I didn't want him to think I hadn't cared about him. That's the only reason I called him. Not to save my life, not in the hopes that he'd stop me.

And I'm glad things went the way they did. I'm glad I arrived at that cross-road, as odd as that sounds. I know what it's like to look into that abyss, and think to myself "You know... that doesn't seem half bad..." Several years ago, I helped one of my co-workers start a local suicide prevention organization, after her son took his life. I'm not involved anymore (for a number of reasons), but the organization is still going strong.

No one knew I was suicidal back then. In school, I was a straight A student. I was the kid everyone went to for help with homework - a model student. I didn't talk to my friends about my home life. I wasn't "emo." I tried hard to fit in, though I never really did. I spent my time in school focused on my work, almost to a manic level.

My friend Julian, to my knowledge, never told anyone about that phone call. Or if he did, they never asked me about it. He never judged me, and he never treated me like I was on suicide watch after that.

I am eternally grateful to him and his mother. There's nothing in the world I can say or do to repay their actions that night.

I still deal with depression and more issues than I can count from the way I was treated as a child, but I'm alive. I survived.

For my prize in the hop, I'm offering a free pdf of any of my stories, found at www.dcjuris.com. Just leave a comment below (including your e-mail and the title of the book you'd like.)

There is also a grand prize of a $50 Amazon Gift Certificate.

I don't have a hop "linky" for you, however, here is the link to the host hop, where you can find the linky and the Rafflecopter for the Grand Prize.