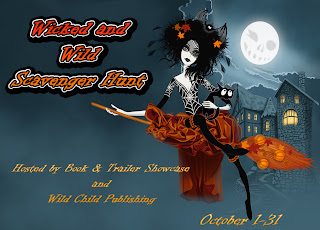 BTS Tours and Wild Child Publishing are proud to present the Wicked and Wild Halloween Scavenger Hunt. 37 blogs have linked together to allow you to hunt for 37 different words that will be hidden in each post, so at the end of the hunt you will have 37 answers to plug into the rafflecopter. Please DO NOT leave your answers in the comment section. We want this to be fun for everyone, and not take the challenge out of the game. So this is how it works.

All the blogs listed below will post their game piece on their allotted date. You are looking for one word (related to Halloween) to plug into the rafflecopter as your answer. For Example:'

If you are on Close Encounters with the Night Kind, and find your word (clues will be provided for you in the banner) you log into the rafflecopter form and place your answer in the box marked Close Encounters of the Night Kind. Follow along the entire Scavenger Hunt and collect all 37 clues. We will be drawing for 4 $25 dollar Gift Certificates to Wild Child Publishing. Happy Hunting!!! 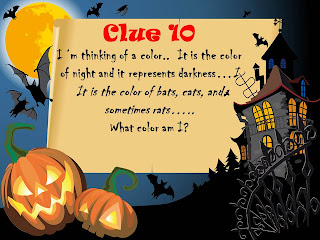 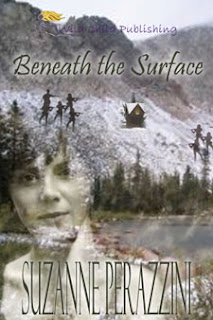 Title: Beneath the Surface

Jo has the darkest of secrets in her past, which drives her to seek out the most traumatic of hotspots in the world as a war correspondent so she never has the time to confront what she did. A fellow reporter, Craig, accompanies her into war-torn Sergavia to recover rolls of film from a dead colleague and along the way Jo finds love and a reason to go back to the beginning so she can move forward.

Branko's eyes, unseeing, gazed up to the heaven I hoped he had gone to. What freakin' heaven, for God's sake? Who was I fooling? Out of the black sky, a wave of hopelessness thundered over me. For an instant a cavity opened and closed, but I had seen inside, and that image of empty loneliness scratched at my sanity.

I fell forward onto my knees by his side and touched an unblemished cheek. It was cold. This was the face Ana loved. I felt her sorrow, and tears threatened. I brushed his hair into place and rubbed at the dirt on that cheek. I had seen more death than most people see in a century of life, but this was Branko. He had a name. I had talked to him. I had liked him.

I heaved my pack onto my back, snatched up the rifle, checked the magazine and put the safety on. There was nothing I could do for Branko, but I could help save his family--if I could get to them before they reached the pass.

I turned around and faced the mountains. That was where I was going. Up there into the snow.

Since a child, I have been driven to explore, look beyond and search out change. This took me to the Fiji Islands on Volunteer Service Abroad at eighteen and after graduating with a Bachelor of Arts degree from the University of Auckland, to Italy, where I stayed for the next decade. I had been out to conquer the world but instead met the man who was to become my lifelong companion. While he studied and did military service, I taught English and travelled.

But the settling down bug caught up with me. I returned to New Zealand, husband in tow, bought a house, started up a business in the fashion industry and had a baby. For many years we worked, worried, renovated houses and homeschooled our son.

However, the need to chill out came back, and now we still work while our son studies for his second degree, but we worry less and enjoy life more.

Roll on the next fifty years.

October 2 - Reading Between the Lines , Beauty In Ruins

October 8 - Love is a Many Flavored Thing

October 16 - For the Love of Reading Reviews , Novelly Nice

October 24 - All She Wants and More