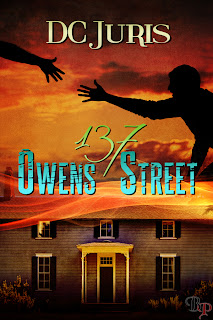 Matthew is going insane. How else can he explain remembering things he doesn't own or trips his wife never took? Not to mention the visions, and the phantom in the café. But when the man in the visions reaches out to him with an explanation, and the phantom from the café tracks him down, things start to make a little more sense. Morgan is a devout Christian. He believes in God, heaven, hell, and the Bible. But his world spins out of control when his husband Matthew disappears and a mysterious man tells a tale outside the realm of reality. How can Morgan put his faith in something so far-fetched? And what will happen to Matthew if he doesn't?


After the weekend he'd had, on Monday Matthew could honestly say he was glad to be back at work. But something about his desk wasn't right. All his things were there—the spinning pen caddy, his fancy one-touch stapler, his little black and white container full of almonds, his old-school Rolodex and phone, his glass frog paperweight—but the positioning was all wrong. Matthew shook his head and rearranged the items into their proper places. Darn cleaning crew. It wasn't like he could complain—moving things around on his desk was hardly the same as breaking something or stealing something, and really, he should just be grateful for the crew's efforts—but the disorder still irked him.

He took a deep breath, plopped down into his desk chair, turned on his computer, and frowned. His icons had been moved around on his desktop too. Maybe the desk makeover hadn't been the cleaning crew after all, but a sneaky co-worker thinking they were funny. One by one, he clicked and dragged everything back to where it belonged and plunged into his day.

Three financial reports and some data entry later, Matthew was ready for a break. He quirked an eyebrow and grinned, remembering his blue mug. Down the hall he went to the break room. He scanned the shelves and counters. No blue mug. What. The. Heck? It wasn't at home, and it wasn't here. Where else could it be? Maybe his car?

With a shrug he pulled his keys out of his pocket and went out to the parking lot, but a careful search of his car—even the trunk and glove compartment, just for giggles—turned up no blue mug.

A burst of white light surrounded him, and he held his hand up against the glare reflecting from his car. His red car. Not the black one he'd gotten into this morning. He'd known something was off when he'd cranked it up, but hadn't been able to place what. Now he knew—the color wasn't right. He took a step toward the car, and a pair of arms encircled his waist from behind.

"Come back to me!" a soft, deep voice pleaded against his ear.

Matthew turned as quickly as he could, but the light and the man had vanished. He closed his eyes and leaned back against his once-again-black car, his heart hammering, his throat thick with emotions he didn't understand. He'd recognized that voice the moment he'd heard it, yet now he couldn't place it. Now it was relegated to the hazy depths of forgotten things, like half-remembered tunes that went like da-da-da-da-da-something...la-la...and nebulous gray snatches of faces from childhood. But in that moment, he'd known, and he'd thrilled in it. The voice had evoked a response from him so intense and swift, like suddenly finding something he'd been missing for years in some random place he'd looked a million times.

He wondered what the speaker had meant. Come back to me. He looked around quickly, cleared his throat, and straightened his clothes. Thankfully, no one else had seen...whatever had just happened. He took a deep breath and headed back into the office. So he was having visions of a different color car and hearing a mysterious voice. That didn't make him crazy. At least, not if he kept it all to himself.

He went back into the building, to his office, and stopped in the doorway. Where was his Chinese dragon? He distinctly remembered buying a print of a colorful Chinese dragon and hanging it right there on the opposite wall. Right where it could be seen from the hallway. Or...had he? Matthew walked over to the wall. No picture hanger. No hole. Had he dreamed the piece of art too?
Posted by Marci Nichelle Jansen at 12:00 AM